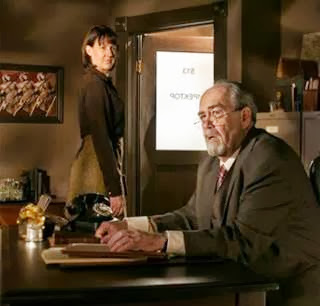 The most fascinating aspect of Invisible Theatre’s production of “The Letters,” directed by Susan Claassen, is how two actors – Roberto Guajardo and Lori Hunt – can create such electrical tension on stage using only their words and their body language.

Without question, “The Letters” is the first must-see event of the new season. It is powerful the way sheer drama is powerful, drawing truth from taut conflicts between willful personalities.

Instead of threatening weaponry, massive explosives hooked up to a ticking timer, agitated suicide bombers or other such special effects, there is a desk and two chairs.

And talent…there is a lot of talent. Guajardo is The Director and we are in his office, with his title painted on the door. Hunt is simply called Anna, a subordinate. She seems to be a featureless cog in the bureaucratic Soviet machine of some equally faceless Russian city in 1931.

It doesn’t take a historian to know the communist party officials of that time kept tightening their hold on the country. Execution was an unspoken threat hovering over every conversation. Each day brought a new struggle against unknown enemies.

Yet, even in these conditions people still had to live, still had families to care for, still needed to find compelling reasons to keep going. No one was really far enough up the political ladder to feel absolutely safe.

The Director had to stay ahead of others competing for his job. Anna may have had an inferior position, but she wasn’t about to cave in.

All of this combative backstory is efficiently set up in the opening conversations between the two. Anna has been called into The Director’s office, but isn’t sure why. She looks for hidden agendas in The Director’s every word.

The Director, determined to defend himself from any threat in any direction, needs to find out everything he can from Anna without revealing any more than he must.

It is the shading of nuance as Guarjardo and Hunt tap dance around this Russian bear of uncaring menace that gives the performance its breath-squeezing grip.

Nothing quite like it has been seen on a Tucson stage in many years. In the real world, with a new revelation coming out every day that our own government has been secretly spying on all of us for years, “The Letters” is a reminder that absolute power corrupts absolutely.

Tickets are $28 general admission, discounts available. For details and reservations, 520-882-9721, or visit www.invisibletheatre.com

Posted by TucsonStage.com at 4:23 PM