"A CHRISTMAS CAROL" WITH EXTRA HELPINGS OF HEART 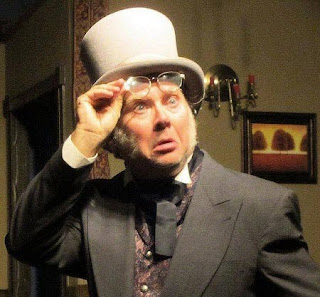 Everybody knows the story of Charles Dickens' “A Christmas Carol.” It is a natural part of our  British American heritage.

Starting with Scrooge living in bitterness isolated as an oyster, followed by the three ghosts of Christmas past, present and future who put a human face on the holiday, and then the beloved transformation of Scrooge himself – right before our eyes.

We love the story as much as we love hearing “Twas the night before Christmas and all through the house....”

Way out on Tanque Verde Road at the APCOT theater, a co-production of “A Christmas Carol” by Roadrunner Theatre Company and Standing O Entertainment calls on the audience to bring their own love and imagination of this spoken carol to a bare bones production adapted and directed by Nick Seivert that glows with the Christmas spirit.

Without benefit of much in the way of lighting and stage sets, an eager cast led by veteran thespian James Gooden as Ebenezer Scrooge makes every familiar scene believable enough through the sheer force of its own will.

There is just enough of a clue in the stage sets of each scene on this familiar journey – flying over snow-capped rooftops, visiting young Scrooge when he gets dumped by his sweet girlfriend, the haunted graveyard and that triumphant transformation at the end – that your heart will still go out to Tiny Tim when he declares “God bless us, every one.”

Gooden has performed this role many times with other Tucson companies. He knows the character of Scrooge inside and out, all the frustrations, all the fears of being poor, and most importantly, all the regret of having let so much of his life slip by as he forged in his own heart every heavy link of that iron chain just like the one Jacob Marley was dragging around.

Adding to the production's pleasure are a number of songs that occur naturally enough in the proceedings, with lyrics that carry the story along. This adaptation was first performed at Tucson's Great American Playhouse in 2013. The cast includes several performers who were in that production.

Mike Conrad is excellent as the patiently positive Bob Cratchit, his pure holiday spirit balancing Scrooge's negativity. Michael Claridge brought enormous energy as both Fezziwig and the exuberant Ghost of Christmas Present, filling the APCOT stage with his own presence.

Matthew Pieri, Jody Darling and the other cast members (several of them children) were true to their roles and so likeable it was easy to feel the generosity of their characters.

Musical accompaniment is provided by pianist Lindsey McHugh, the show's music director, who also leads the audience in singing Christmas songs before each performance.

“A Christmas Carol” runs through Dec. 24, with performances at 7 p.m. Thursdays-Saturdays, 3 p.m. Sundays, plus a special 3 p.m. show on Christmas Eve, at the APCOT theater, 8892 E. Tanque Verde Road.

Posted by TucsonStage.com at 7:43 AM