Planning meeting for the spring Carport Theater event, which will take place on March 22 and 23, 2019.
The theme is "breakthrough," which can include "breakout", or "breakdown".
Anyone is welcome who is interested in participating, either as a performer, writer, or stage help, or is simply curious to learn more.
Join us for some fun brainstorming!

Posted by TucsonStage.com at 9:04 AM No comments:

Posted by TucsonStage.com at 1:23 PM No comments: 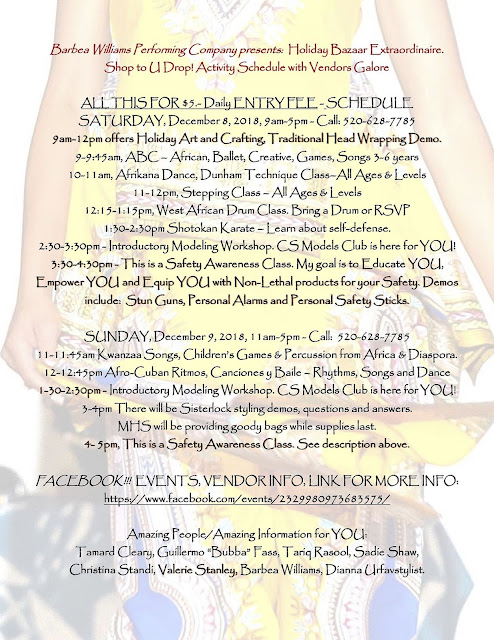 Posted by TucsonStage.com at 1:21 PM No comments:

FOR THE MOST DIRECT ROUTE TO THE THEATRE, ENTER THE MALL THROUGH OR NEXT TO THE CONTAINER STORE.

PLEASE NOTE: This location is located in within the Tucson Mall.  The Mall closes at 6pm. If you arrive after 6pm, we anticipate that the only unlocked door will be the mall entrance on the ground floor next to the Container Store, near the Cheesecake Factory.

Tickets are $7 presale and $10 at the door. Doors open at 5:30pm. Showtime is 6:00pm. Make reservations now by contacting us on Facebook, emailing res4mmc@gmail.com or musicalmayhemcabaret@gmail.com or online by visiting https://squareup.com/store/musical-mayhem-cabaret

Unused tickets can be traded for tickets to a future show.

Musical Mayhem Cabaret is an under rehearsed and over dramatic musical comedy troupe based in AZ since Jan 2011!

Posted by TucsonStage.com at 10:40 AM No comments:

"You're gonna LOVE the way this production of MAMMA MIA! makes you feel!" - Chuck Graham - Let the Show Begin

Come have a blast with us as we give our final three shows this weekend.  Shows at 2:30 and 7:30 and 2:30 Sunday, The Berger Performing Arts Center.  1200 W Speedway.  Go to arizonaonstage.org and use the code   WATERLOO   and get $10 off general admission tickets and $5 off all other tickets -

Come have the time of your life!!!!

Posted by TucsonStage.com at 12:22 PM No comments:

YOU'RE GONNA LOVE THE WAY THIS "MAMMA MIA" MAKES YOU FEEL 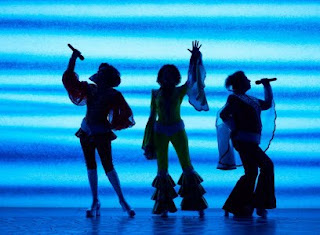 Donna and the Dynamos step out of the shadows at Sophie's wedding.

That spirit of unquenchable optimism thrives in the eager Arizona Onstage production of “Mamma Mia,” celebrating the songs of ABBA. No matter how many times you've seen it, on Broadway, at Broadway in Tucson or someplace in between, you haven't seen a production more endearing than this one directed by Debbie Runge.

Danae Dorame gets the star-making role of Sophie, the Greek island girl who discovers her mom Donna's old diary, only to read how her mom spent the night (dot...dot...dot...) with three different men in the summer of 1979.

Convinced one of these men is the father she has never known, 20-year-old Sophie invited all three to her wedding on the tiny island where she grew up, helping her mom run a picturesque taverna.

Back when Donna was carefree and single she was the lead singer of Donna and the Dynamos. But once Sophie was born, Donna put those dreams aside to run the taverna and make a loving home for her daughter.

Dorame has a terrific voice, soaring freely with the impetuousness of youth. Donna is sung by Tucson favorite Liz Crachiolo. Mature and reasoned, her singing adds a bittersweet quality to the role.

Donna is proud of her life of independence and resourcefulness, but also knows she has paid a price by staying on the island and raising Sophie by herself.

As for those three men with all the dots in Donna's diary. Dennis Tamblyn topped the applause meter as Bill, in his duet and dance number with Jessica Armistead as Rosie, one of the Dynamos.

They sing “Take A Chance On Me” the day of Sophie's wedding. Their natural chemistry together immediately won the audience over, cheering spontaneously.

Kit Runge is cast as Sam, the sincere one. He and Donna get to sing the big number “SOS.” They are the natural fit in voice and personality.

Harry, the third man, is Jordan Siebert. In his youth they called Harry a headbanger, but he grew up to become the strait-laced one with corporate connections and a proper manner.

Also creating a unique character was Stephanie Sikes as Tanya the flamboyant Dynamo, oversexed and proud of it. As the comedy relief Tanya brings a flashy dash of cynicism to counter all the joyfulness from everyone else.

Debbie Runge is also the choreographer. With a cast that includes 22 chorus members and 22 songs in the show, she has plenty to work with. All the company numbers are impressive, filling the stage with consistently moving bodies who are well-rehearsed.

The song list includes “Dancing Queen,” “Super Trouper,” “Chiquita,” “The Name of the Game” and at the very end “Waterloo.”

But walking back to the parking lot after the show, Sophie is the one you will be thinking of. She's the one who discovers herself.

Posted by TucsonStage.com at 4:20 PM No comments:

Join Arizona Opera for family fun in Tucson! This is a great way to explore opera and make family memories that will last a lifetime. This event features a live performance of the classic opera The Magic Flute (adapted for children), story time, and other fun activities!

Posted by TucsonStage.com at 3:40 AM No comments:

There is a $10 cover (some bar stools available but mostly standing room only), and $20 for VIP (includes voucher for one drink at the bar and front section, guaranteed seats).

VIP tickets usually sell out in advance, so use the ticket link to get them early; both general admission and VIP tickets can be purchased securely via the link on the side! You can also buy General Admission tickets at the door. Ages 21+.

Posted by TucsonStage.com at 3:37 AM No comments:

From funny mishaps to heartwarming memories, we’ll celebrate the holiday stories that unite our families and our communities.

·         Tickets available are limited and offered on a first-come, first-served basis.

·         A limited number of tickets may be offered for purchase at the door.

Posted by TucsonStage.com at 3:32 AM No comments:

Free and open to the public

French New Wave director Francois Truffaut’s Day for Night is a passionate love letter to the art of filmmaking. Truffaut himself stars as Ferrand, the director of a film where the behind-the-scenes drama is more interesting than anything happening in front of the camera! This sexy, funny, and sometimes tragic film is considered by many to be Truffaut’s masterpiece, and one of the greatest foreign films of all time.

Join faculty from the School of Theatre, Film & Television as they screen their favorite movies about film and television. At each screening, a faculty member will introduce their film of choice and share insight about the film’s history and significance to the entertainment industry. Select screenings will be enhanced with the presentation of a short film by a BFA film student in the program.

Posted by TucsonStage.com at 3:29 AM No comments:

Winding Road Theater Ensemble, in partnership with the YWCA of Southern Arizona, is proud to present Spring Awakening: In Concert, a special benefit production in support of Planned Parenthood Arizona.

Both shows start at 7:30pm
Suggested DONATION collected at the door - $25

Posted by TucsonStage.com at 8:04 AM No comments:

From the Music of Sara Bareilles (Presented by Broadway in Tucson)

"THE WOMEN OF WAITRESS ARE CHANGING BROADWAY!" (Time Magazine).

"It's an empowering musical of the highest order!" raves the Chicago Tribune.

Inspired by Adrienne Shelly's beloved film, WAITRESS tells the story of Jenna - a waitress and expert pie maker, Jenna dreams of a way out of her small town and loveless marriage. A baking contest in a nearby county and the town's new doctor may offer her a chance at a fresh start, while her fellow waitresses offer their own recipes for happiness. But Jenna must summon the strength and courage to rebuild her own life.

WAITRESS, the hit Broadway musical coming to Centennial Hall December 4-9, 2018, is looking for two young local girls to alternate in the role of "Lulu" during the Tucson engagement.

Posted by TucsonStage.com at 8:02 AM No comments:

This event has been verified by the Arizona Daily Star.

Posted by TucsonStage.com at 7:58 AM No comments:

This event has been verified by the Arizona Daily Star.

Posted by TucsonStage.com at 7:57 AM No comments:

The story of a tailor who discovers that the adventure
he longs for lies at his feet – in his pile of laundry.

PLAY NUMBER THREE IN OUR '18-19 SEASON FOR SCAMPS.

The new production from renowned physical theatre performer Wolfe Bowart, Cloud Soup tells the story of a tailor who discovers that the adventure he longs for lies at his feet – in his pile of laundry. The tailor’s humble shop becomes an undiscovered world as fabrics magically morph, found objects transform into curious beings and puffs of steam remind us of a time when we saw faces in the clouds.

Wear mismatched socks, put your shoes on the wrong feet, turn your shirt inside out and you’ll be perfectly dressed for Cloud Soup.

Audience: Best enjoyed by scoundrels & scamps ages 5+.
Is this show appropriate for my child?

Posted by TucsonStage.com at 7:55 AM No comments:

As OSIRIS-REx approaches the asteroid Bennu, a family-friendly variety show explores how space unites science and the humanities.

BENNUVAL! will feature a “TED-style talk” from Lauretta about the origin of life and the importance of asteroids, including details about both the OSIRIS-REx mission and JAXA’s similar Hayabusa2 probe.  The  UA College of Humanities named Lauretta its Alumnus of the Year in 2017. Lauretta, who studied Japanese as one of his triple majors at the UA, says his humanities background has been valuable in working with colleagues in the Japan Aerospace Exploration Agency, JAXA.

Tickets are $10 for the general public and $6 for students and CatCard holders, and are available at the Fox Tucson Theatre.

Selections from the 2016 exhibit The Poetry of Spaceflight, UA Poetry Center

Posted by TucsonStage.com at 7:49 AM No comments:

Winding Road Theater Ensemble, in partnership with the YWCA of Southern Arizona, is proud to present Spring Awakening: In Concert, a special benefit production in support of Planned Parenthood Arizona.

Both shows start at 7:30pm
Suggested DONATION collected at the door - $25

Posted by TucsonStage.com at 7:40 AM No comments:

Audition Technique Course at The Studio for Actors

From: The Studio For Actors <acting-courses@the-studio-for-actors.com>
Sent: Wednesday, November 21, 2018 9:43 PM
Subject: Announcement: Audition Technique Course at The Studio for Actors

This is the foundation course for learning the important building blocks to great performance.  You'll learn how to break down the script, how to analyze the character, how to play him/her, and most importantly how to mark the script in order to give a really great audition.  Throughout the course, you'll have two or three auditions, and you'll be given lots of information about how to handle the important few minutes before each audition.  This course is not just about auditioning - it's also a great acting class.

Don't worry if you have to miss one or even two classes during the series of six. We can easily book a private make-up session outside of the evening class, scheduled Monday through Saturday at 12:00 or 1:00.  This course can also be taken as a series of private sessions, offered during the daytime, evenings, or on Saturdays, usually taken one session per week.

Each of these classes is taught by Anna Risley at her Studio (The Studio for Actors), located on 6th Street, just off 4th Avenue.  Anna has 30 years of experience in film, television, voiceover, and stage acting.  To check out her resume, please visit http://www.the-studio-for-actors.com , or call her at (520) 881-2363 to sign up.

Posted by TucsonStage.com at 3:06 PM No comments:

Members, come a few minutes early to cast your votes.
Here is your 2019 Board:

Learn more about independent film in Arizona and be involved! We offer educational monthly meetings with experts in the film industry - and it's a great opportunity to network with industry professionals.

Posted by TucsonStage.com at 3:06 PM No comments: