You don't want to miss this.

Posted by TucsonStage.com at 9:12 AM No comments:

Thirteen-year-old Elikia, resilient and courageous, leads young Joseph on a harrowing escape through the jungle.  Their moving story is played out through memories and the testimony of Angelina; the dedicated nurse who cared for them.  This life affirming and intimate portrayal of courage and hope, examines the use of children in political conflict and war.

Posted by TucsonStage.com at 9:09 AM No comments:

Learn what it takes to make a perfect 2-minute Pitch, for actors, writers, directors, and producers.

Posted by TucsonStage.com at 4:59 PM No comments:

Posted by TucsonStage.com at 10:09 AM No comments:

MUSICAL THEATRE & OPERA WORKSHOP SHOWCASE
Tuesday/Thursday, May 7 & 9 at
3:30 p.m.
Center for the Arts, West Campus
Under the direction of Darryl King featuring scenes from: Hansel & Gretel by Humperdinck, The Music Man, Guys and Dolls, Oklahoma, Songs for a New World, The Ballad of Floyd Collins,
Sweeney Todd, Dear Evan Hansen, Carousel, A Chorus Line, She Loves Me, Steel Pier, and
Annie Get Your Gun.

Posted by TucsonStage.com at 10:07 AM No comments:

Welcome to the Gaslight Music Hall in Oro Valley!

To The Gaslight Music Hall

Check out these events at the Gaslight Music Hall!

Book right away to reserve your favorite seats!

Posted by TucsonStage.com at 6:22 AM No comments:

Have you wondered what the secrets of great performing artists are, and how you could work toward becoming one yourself?

In our Beginning & Intermediate Technique classes you will experience the foundation of what Stanislavsky considered his "greatest discovery after 40 years of research, Psychophysical Action:  The "secret" deemed by all great actors to organic behavior and spontaneity in performance.

Master Teacher, Philip G. Bennett, will teach share with you what he has found to be the most successful acting techniques from his 50 years of teaching the System. You will learn: Focus & Concentration through Yoga based Meditation, Psychophysical Conditioning Exercises that unite the mind and body and release spontaneous emotions, all 89 Elements of  the Stanislavsky System based on Action, Short and Long-form Dramatic Improvisation tools used with  Active Analysis through Physical Actions and applied to the interpretation of a text, Monologue & Scene Study, but to name a few.

Cost: $175 for Technique Classes (Saturdays Only).

**Please note that classes are ongoing throughout the year, and curriculum is customized & based on current enrollment.

Posted by TucsonStage.com at 6:19 AM No comments:

Coming Soon to the LTW Mainstage 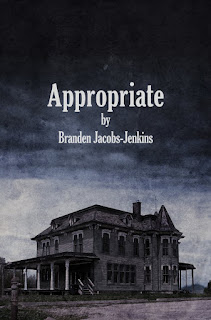 The 2015 Obie Award winner for Best New American Play. Every estranged member of the Lafayette clan has descended upon the crumbling Arkansas homestead to settle the accounts of the newly deceased patriarch. As his three adult children sort through a lifetime of hoarded mementos and junk, they collide over clutter, debt, and a contentious family history. After a disturbing discovery surfaces among their father’s possessions, the reunion takes a turn for the explosive, unleashing a series of crackling surprises and confrontations.

Contains strong language, adult themes and subject matter that may be considered offensive

Posted by TucsonStage.com at 9:31 AM No comments:

Black Renaissance, dedicated to the art of the spoken word @ Hotel McCoy

Black Renaissance will occur each Saturday evening in May at Hotel McCoy, from 8:00pm to 10:00pm dedicated to the exploration of Arts in the Black Community. This spotlighting of black creativity is designed for the community at large to help in the learning of Black Artists and their steady influence on mainstream culture. 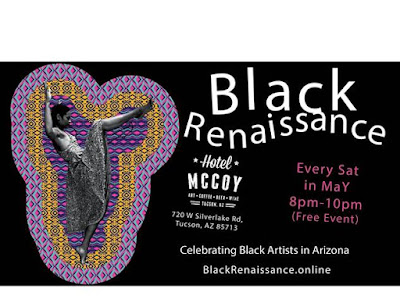 This evening is dedicated to the art of the spoken word with performances by:

*Parking on S. Fiandaca Rd across from the hotel

Posted by TucsonStage.com at 11:31 AM No comments: 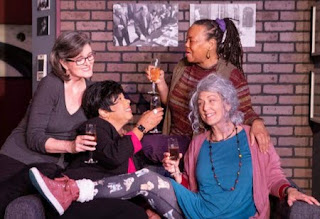 Are you ready for a hymn of praise to activist women of the boomer generation? Invisible Theatre is ready, opening a bouncy production of Susan Miller's “20th Century Blues” directed by Susan Claassen.

This isn't the kind of blues that makes you sad. It's the kind that makes you happy. Really happy. Or as the New York Times phrased it: “'20th Century Blues' is genuinely sweet. But sometimes it is even sweeter than that, as though Ms. Miller has baked a chocolate cake and then frosted it with sugar cubes.”

Ranging far and wide in Miller's determination not to leave out any women in this celebration of social change, her play also has so many agendas running off in so many different directions it starts feeling like a starburst train schedule of female achievements – and of aging.

Like all boomers, the four women holding center stage are also surprised to discover they are growing old. Consider all we have achieved, they imply, but who thought we'd end up looking like everyone else.

Hollywood used to make movies like this about grizzled old soldiers sitting around a bar in some bombed-out foreign country, telling war stories and feeling young again.

Now we watch and listen as Danny (Geri Hooper Wharam), Gabby (Susan Cookie Baker), Mac (To-Ree-Nee Wolf) and Sil (P.I. Peavy) remember how they met when they were all arrested at the same demonstration of disobedience in 1970. Then for two hours they take turns making brisk comments that skip like flat stones of political moment off their proud counter-culture's irregular surface.

Each person's actual appearance is kept in the spotlight by making the over-achieving Danny a successful photographer who spent the past 40 years taking photos annually of her three friends Gabby, Mac and Sil.

At first the photos were just for fun. But as time passed and Danny became more prominent the box of her friends' pictures began to seem like a project that could boost her own career.

Handily enough, Gabby has retained most of her old hippy, all-natural, vibe. Sil has lived the most conventionally, becoming a real estate agent and considering plastic surgery to restore her youthful appearance.

Mac has stayed the most true to her angry roots as a gay, black female, determined to stand up for the newly declared rights of all three groups.

Adding to the time perspective, representing the portal generations both before and after the boomers are Molly McKasson as Bess the 91-year-old mother of Danny, and 20-something Cole Potwardowski as Danny's son Simon, the guru of digital technology. He shows the ladies how they can stay relevant surfing the 24/7 news cycle on their cell phones.

"20th Century Blues” continues through May 5 with performances at 7:30 p.m Wednesdays through Fridays, 3 p.m. Saturdays and Sundays, plus 7:30 p.m. Saturday, May 4, at Invisible Theatre, 1400 N. First Ave. All tickets $35, with group discounts available. For details and reservations, 882-9721, invisibletheatre.com

Posted by TucsonStage.com at 7:33 AM No comments:

"It's not often we get to see four older, diverse female actors
on stage together with meaningful, powerful dialogue.
The women talk to each other with a directness
that we rarely get to witness."
-Gretchen Wirges -
Taming of the Review

Now through May 5th, 2019
Get Your Tickets Now!
Mention BFF and save the Handling Charge
All Performances $35
(*Preview Tuesday, April 23rd at 7:30 $20)
Group Discounts Available 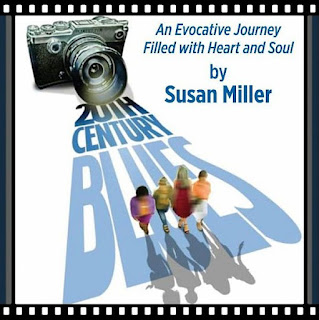 Invisible Theatre concludes its 48th Anniversary Season with the Southwest Premiere of 20TH CENTURY BLUES by Susan Miller. This sharply funny and evocative new play features an all-star cast: Molly McKasson, Susan Baker, ToReeNee Wolf, Geri Hooper Wharam, P.J. Peavy, and Cole Potwardowski and is directed by Susan Claassen with Fred Rodriguez. A reunion. An Argument. A Ted Talk. Emotional mutiny. And a bond that connects four women who meet once a year for a photo shoot, chronicling their changing (and aging) selves as they navigate through love, careers, children, and major world events. But, when these private photographs have the potential to go public in a retrospective at MoMA, their relationships are tested, forcing the women to confront who they are, what they've become, and how they'll deal with whatever lies ahead.

"20TH CENTURY BLUES...breaks the mold when it comes to the female
ensemble dramedy...With poignant but still laugh-out-loud social commentary on the process of aging in America, razor sharp one-liners and thought-provoking questions about older generations adjusting to the younger world, 20TH CENTURY BLUES takes a tried and true comedic premise and adds a uniquely modern twist."
- BroadwayWorld.com

"Do not miss this show! You will laugh, identify, love! Well acted,
well directed and well written. Doesn't get better than that."
- A "Picture Perfect" Patron

Get your photo taken when you see the show!
#invisibletheatrebff

Posted by TucsonStage.com at 7:26 AM No comments: 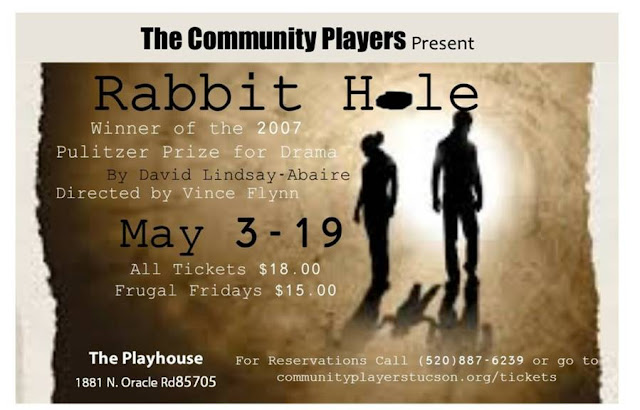 Winner of the 2007 Pulitzer Prize for Drama, Rabbit Hole examines the different ways that people deal with a major loss.  Not only does Lindsay-Abaire involve the parents, the grandmother and aunt of the small boy who was killed, he includes the teenage boy who was responsible.  A hard hitting drama, it also allows the audience some comedic relief while dealing with difficult subject matter.
BUY TICKETS
http://www.communityplayerstucson.org/
-------------------------------------
Tucson Theatre Announcement List
TucsonStage.com for subscription information

Posted by TucsonStage.com at 4:11 AM No comments:

COMEDIAN RICH VOS, LIVE IN TUCSON, MAY 8TH AT THE "O"

Rich Vos is an American comedian and actor. He has over 100 television appearances including 4 Comedy Central Specials as well as HBO, Showtime, and Starz appearances. He produced and starred in an award winning comedy movie Women Aren't Funny alongside Bonnie McFarlane, Chris Rock, Rosie O'Donell and many more. He is a 2 time Academy Awards writer, a regular on Sirius XM radio and the cohost of the hit podcast, My Wife Hates Me that Paste Magazine named one of the best podcasts right now. He has also appeared on WTF with Marc Maron, the Joe Rogan podcast twice, Guys we F@%*@ed. He's been sober for over 32 years and good at golf for 20.

Posted by TucsonStage.com at 5:25 PM No comments: