"APPROPRIATE" IS PACKED WITH POWER AND CONFLICT 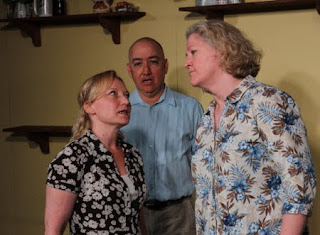 From left, Bree Boyd, Keith Wick and Rhonda Hallquist build up the tension at Live Theatre Workshop in "Appropriate."

Live Theatre Workshop is taking a deep dive into serious theater with a blistering production of “Appropriate" written by Branden Jacobs-Jenkins.

Here on the threshold of summer, traditionally a time of light comedy and entertainment, comes theatrical intensity propelled by a string of exceptional performances.

Glen Coffman as director has assembled a strong cast of LTW favorites and added a few new faces, all to leave each audience member a little wobble-eyed in rethinking its own family experiences.

Dysfunctional families have always been a mainstay of playwright inspiration, a lens through which are projected society's larger problems. Jacobs-Jenkins begins structuring his stage family with Toni (Rhonda Hallquist) and her younger brothers Franz/Frank (Cliff Madison), the wayward one, and Bo (Keith Wick), the New York businessman.

It was their deceased father Ray who had much earlier moved everyone from Washington DC to the family's old plantation home in rural Arkansas. A home whose 19th century secrets rise up to haunt this family as they come together after years of indifference. All they want is to sell off the old place, crumbling into ruin, and settle their current differences,

Toni and Bo, who see themselves as the responsible children, grew up with their parents in Washington, while Franz (who the siblings call Frank) led his estranged life in parts unknown.

Toni as the eldest holds the power position in executing their father's will. Although single, she is raising her son Rhys (Adam Denoyer), now in his late teens.

Bo arrives from New York with his defensive wife Rachel (Bree Boyd), who only has insults for her in-laws. But their 13-year-old daughter Cassidy (Ella James) thinks Rhys is kind of cute.

Disheveled Franz/Frank makes his entrance climbing through a window. His companion is the free-spirited and much younger River (Emily Gates). Also cast is Alexander Cramton as Cassidy's younger brother Ainsley.

The large cast maintains a fine ensemble spirit working together to keep an involved story from ever getting bogged down. The play's ample humor is mostly in the form of snappy come-backs as each of the siblings and their families keep vying to be top dog while arguments continuously break out like flares in a raging wild fire,

The heat takes a quantum leap into racism when an old photo album is discovered from their father's own hidden past, as well as the presence of a white hood from the Ku Klux Klan.

Ticket are $15 Thursdays, $20 all others. For details and reservations, 327-4242, or livetheatreworkshop.org

Posted by TucsonStage.com at 1:42 AM