Music and Lyrics by Jeff Bowen

The Southern Arizona Performing Arts Company (SAPAC), a new nonprofit organization dedicated to bringing musical theater to the Tucson area, is pleased to announce [title of show], the first production in its inaugural 2019-2020 season.

This Tony Award-nominated musical was an instant hit (having also won an Obie Award during its Off-Broadway run). Now receiving its first professional production in the Tucson area, [title of show] chronicles the adventures of Jeff and Hunter, two struggling writers scrambling to write a musical to submit to the New York Musical Theatre Festival. With the deadline looming, and with nothing to lose, the pair enlists the help of their friends Susan and Heidi (with Larry on the piano), and decide to try and create something exciting and new. What you get is four friends writing a musical about four friends writing a musical:  meta-theatre at its most hilarious!

With music and lyrics by Jeff Bowen and book by Hunter Bell, [title of show] charmed audiences and critics alike:  "Have I got a show for you! A zesty, sweet, Broadway-trivia-riddled musical, [title of show] is at heart a postmodern homage to the grand tradition of backstage musicals like Babes in Arms, Kiss Me, Kate and A Chorus Line." – New York Times 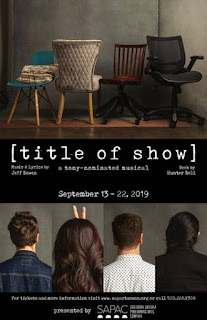 Posted by TucsonStage.com at 9:35 PM