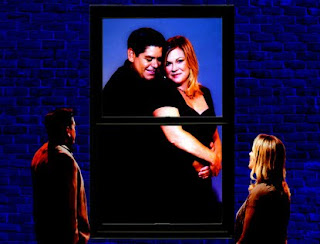 Admit it, there is just something spell-biding about the seductive irony of Jason Robert Brown's two-voice musical “The Last Five Years.” Resistance is futile.

Whether you still feel euphoric about falling in love, or only bittersweet when it comes to remembering romance, this 90-minute show with no dialogue now playing at the northeast side Roadrunner Theatre will grab your heart before you know it.

Jodi Darling and Jose “Chach” Snook – happily married in real life – know exactly where to find all the agony and anxiety that fill each of the show's 15 numbers; as well as how to make the lyrics bite down hard. There is joy in there, too, shimmering like it will never end.

But pure poignance is the active ingredient throughout, enhanced by the immediacy Darling and Snook bring to their roles. Mark Klugheit as director has them pulling genuine feelings from every mood change, whether happy or sad.

It was Brown's own divorce, we are told, that inspired this show's music, lyrics and book. There is Jamie the intense Jewish writer, getting a best-seller published at age 23. He is determined to fall in love with a “Shiksa Goddess.”

To get that rueful “I wish I knew then what I know now” feeling, Brown has Jamie singing about their five years of love, marriage and divorce in chronological order. Meanwhile Cathy, in turn, remembers and sings her version starting at the end of their five years and working back to the beginning.

So in the first scene Cathy, crushed and alone, is singing “Still Hurting;” followed by Jamie, starting in Year One, looking for his “Shiksa Goddess.”

Performing on an impressive stage set designed by Clark Ray, they continue taking us both forward and backward simultaneously, never appearing together except in Year Three, married and singing  “The Last Ten Minutes.”

Each pair of songs completes a scene, showing the hope of innocence and crush of what would happen. Jamie's instant success makes him seem exciting to Cathy, but then Cathy's failure to find much theater success for herself stresses them out.

On the road playing summer theater gigs in Ohio, she resists the temptations of being with another man. But Jamie facing more powerful temptations in the Big Apple, isn't so successful.

"The Last Five Years" debuted off Broadway in 2002. While these male-female roles follow generally conservative models of how men and women act, the music has timeless power in its plaintive expressions of many different desires.

Also in the cast, adding their own personalities playing a variety of non-singing, non-speaking roles are Stefanee Chevalier, Lucas Gonzales and Cisany Olivar.

Tickets are $25 general admission, $22 for students and seniors, $18 for military and for starving actors. Group rates are available.

For details and reservations, 520-207-2491, or visit roadrunnertheatrecompany.org

Posted by TucsonStage.com at 9:11 AM