"EURYDICE" IS MAGICAL, MYSTICAL AND WONDERFUL 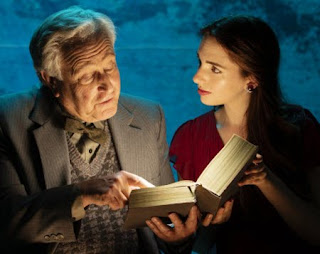 "Eurydice” at the Scoundrel & Scamp Theatre is ART spelled with capital letters. What the play means isn't nearly as important as how it feels. And when Sarah Ruhl is the playwright, you can be sure it is going to mean a lot.

But Claire Marie Mannle as director packs a complete set of theater tools equal to the task of presenting this re-imagining of the Greek myth of Orpheus and Eurydice, so satisfying  you come away having a full experience.

This production glows, literally, with the seamless collaboration of set designer Jason Jamerson, lighting designer Josh Hemmo, sound design supervisor Matt Marcus and musical director Vicki Brown. Theirs is a wonderfully complete effort, to be sure.

Rather than searching for universal truths, Mannle brings us delicately to the longing of daughters seeking a more complete connection with their fathers. Never directly spoken, this underlying desire can quickly expand in the audience to include every adult child's wish to be equally understood by its parents.

There is only a short step to becoming parents longing to embrace their own children across the years.

All of this is brushed with a gentle humor amid stage settings that create a mood more than a sense of place. But even when the indoor and outdoor landscapes are mostly implied – the characters often metaphorical – we are caught up in the grappling of Kathleen Cannon as Eurydice and Bill Epstein as Her Father.

Eppstein has never been better. Cannon is a relatively new face here. The chemistry between these two will give your own heart a good squeeze.

Orpheus (Adam Denoyer) has the look of a rock star on his day off, stripped of all the concert trappings but still feeling that spectral connection to the Gods.

Stepping in to add the complications is Ryuto Adams as the deucedly sinister figure identified in the program as A Nasty Interesting Man. You can also think of him as the Guy Who Runs the Underworld.

All the actors wear everyday clothing, making the production seem to be set in current times without being specific.

Briefly, the story begins with Eurydice and Orpheus deeply in love. On their wedding day, Eurydice tragically dies and Orpheus in a rock star moment vows to retrieve her from the Underworld.

Eurydice in the Underworld, unaware of Orpheus' promise, goes through her own awakening. Then come several touching scenes with her father, who has been down here for years, but still able to watch her.

The play is performed in 90 minutes without an intermission. That mythic moment when Orpheus does go into the Underworld to bring back his wife occurs at the approximate half-way point.

"Eurydice" runs through Oct. 28 with performances at 7:30 p.m. Thursdays through Saturdays, 2 p.m. Sundays, in the Scoundrel & Scamp Theatre, 738 N. Fifth Ave. in the Historic Y.

Tickets are $28 general admission, $20 for ages 30 and under, $15 for students and teachers. Further details and reservations, 448-3300, or visit scoundrelandscamp.org

Posted by TucsonStage.com at 2:52 PM