THERE'S NEW-FANGLED FUN IN "DEATH BY DESIGN" AT LTW 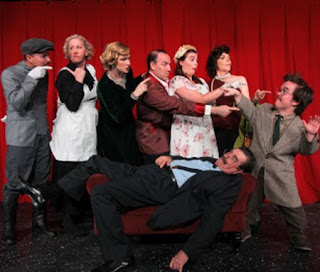 For some reason, all the online reviews of “Death By Design” describe it as a “mash-up” of Noel Coward and Agatha Christie. Maybe they mean Coward's upscale wardrobe and manners combined with Agatha Christie's gaslight clever detectives.

“Death By Design” is all that, but what's best for me is how the jokes feel as new as Netflix. Better yet, think of “Death By Design” as old-fangled theater kicked up with new-fangled punch lines. Or how it's like watching a fresh episode of an old favorite TV show.

Roberto Guajardo as director keeps all that clever dialogue zipping along. Rob Urbinati the playwright has tossed so many red herring into the plot you could cook up a pot of crime chowder in no time.

It's this pace that makes everything fun. No sooner is one distraction replaced by another, one eccentric character eclipsed by a bigger one, then all the fingers on stage are pointed in the opposite direction to identify the newest guilty transgressor.

So let yourself slip back nearly 100 years (this is the Noel Coward part) to oh-so-proper England in 1932 at the elegant country estate of successful playwright Edward Bennett (Christopher Moseley) and his gracefully dramatic wife Sorel (Missie Scheffman).

Looking after these two and getting all the best laughs are the unflappable maid Bridgit (Rhonda Hallquist) and quippy Jack the chauffeur (Jonathan Heras).

Stuffed shirt Walter the conservative politician (Michael Woodson) is the one nobody likes. He spends nearly half the play onstage as a dead person.

Stopping by to keep everyone guessing are Victoria (Roxanne Harley) the bohemian artist who loves to dance with her own paintings; Eric (Tyler West) the energetic socialist who never slows down; and mysterious Alice (Emily Gates) who doesn't wear her glasses but can't see a thing without them.

We spend most of the first act getting to know all these personalities. Hallquist has a grand time spouting snappy observations and applying her sleuthing skills as an amateur detective. Curiously, she can also list the number of deadly poisons that one may grow in one's own garden.

Scheffman is wonderfully over the top and has her upscale moves down pat. We are convinced this Sorel would feel right at home riding in the most grand Duesenberg on wheels.

Getting right to the point of “Death By Design,” the death in question takes place in bright stagelight. Right after intermission we clearly see Alice fire a handgun point blank at Walter on the couch.

He looks dead enough, then we remember Alice's terrible eyesight. Bullet holes are found in the wall behind Walter' couch. One of the bullets is still warm. But Walter is definitely dead.

So...umm...who dun it? Act Two is just getting started.

For further details and reservations, 327-4242, or visit livetheatreworkshop.org

Posted by TucsonStage.com at 1:43 PM