HEARTFELT LAUGHTER FILLS "THINGS BEING WHAT THEY ARE" 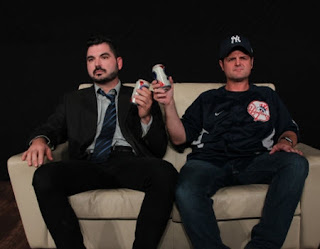 Bill (Steve Wood), at left, is married but unsure of  his wife's fidelity. Jack (Stephen Frankenfield) is divorced but not any happier. Human nature never sleeps in "Things Being What They Are."

Samantha Cormier's super-power is comedy and she's been lifting a planet-load of laughs this season. Last April was her scene-stealing performance as Louise the hectic hillbilly in “Always, Patsy Cline.”

Now she's director of the summer season's most amazing performance of two lost guys sittin' around drinkin' – formally titled “Things Being What They Are” by Wendy MacLeod, running at Live Theatre Workshop.

Stephen Frankenfield and Steve Wood play the two guys, both approaching middle age and feeling none too happy about how their lives have turned out so far. There are no other cast members.

Frankenfield is Jack the noisy one, divorced and in his 40s, but still not sure why he keeps coming up a day late and a dollar short. To cover all his disappointments and social shortcomings, Jack just pours on more energy, flaunting how he really doesn't care what other people think.

More proper and reserved is Wood as Bill, a business executive still believing if he just works hard and acts responsibly, everything will work out. But here he is unhappily married, convinced his absentee wife is having an affair and not having much actual home life anyway.

But that is just the set-up. “Things Being What They Are” is a genuine comedy, after all. One with a pretty high jokes-per-minute rating in a style of sitcom humor that falls somewhere between Neil Simon and Jerry Seinfeld.

All the jokes are quick and often clever, peppered with pop culture references, delivered with an off-handed ease that feels so natural, you'll be wanting to help yourself to one of those beers in that onstage refrigerator.

Cormier brings out all the laughs in this mash-up of blues and brews so successfully, with such a keen sense for nuance, that revealing moments of conversation can feel like eavesdropping. Both men are digging deeply into their roles, creating genuine chemistry that makes for captivating theater.

To get this whole thing started we begin with a stage full of packing boxes in an empty condo with a sterile kitchenette. Bill is the new resident, relocated by his company. Reluctant to start unpacking, he's waiting for his wife to arrive, but not convinced she will.

That's when lonely Jack from next door comes bolting in, full of eagerness and questions for the new guy. Bill on the defensive feels flattened back against that empty white fridge.

But hey...they may have quite different personalities but beneath all that, they are both genuine guys with their own genuine guy strategies. Bill refuses to get involved with Jack's crazy questions, Jack refuses to be ignored.

Slowly through their rounds of mental poking and jousting they come to realize both are living kind of screwed up lives. This isn't the future they planned on. By the time more serious problems arise for both, they have developed a mutual admiration for each other's courage.

“Things Being What They Are” runs through July 20, with performances Thursday-Saturday at 7:30 p.m., Sunday matinees at 3 p.m., in Live Theatre Workshop, 5317 E. Speedway Blvd. Tickets are $15 Thursdays, $20 all other performances, with discounts always available. For further details and reservations, 520-327-4242 or visit livetheatreworkshop.org

Posted by TucsonStage.com at 10:58 AM