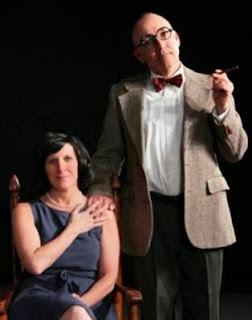 Carrie Hill and Keith Wick play a couple married in name only in "The Columnist."

While the powerful mid-20th century newspaper columnist Joseph Alsop dodged one kind of public shame, it was the earthquake of shifting counter-culture forces that would bring him down.

Anyone who lived through the Fifties and Sixties will recognize Alsop's name and remember other journalistic luminaries such as James “Scotty” Reston and Walter Lippmann whose names are dropped into the dialogue.

Alsop was a leader in that group. He was The Columnist, a heady title for an earlier time when newspapers shaped opinions and their staff columnists shaped the newspapers.

Pulitzer Prize-winning playwright David Auburn (“Proof”) gives his play “The Columnist” a clackity typewriter authenticity that feels like a period documentary, and a pungent poignancy for a time when facts were published on newsprint and chiseled in stone, hacker-proof.

Both are popular local actors with a sizable following at LTW. Both are better known, it should be noted, for playing comic roles and quirky characters. Seeing them wearing conservative suits of the period and acting like actual grown-up adults is a bit unexpected.

There's nothing silly in “The Columnist.” There is humor, mostly coming from quips in high-pressure situations -- with a time frame that stretches from Moscow in 1954 to Joseph's own Washington DC study on a muggy summer night in 1968.

Wick creates an arrogant, itchy, aggressive Alsop who thrives on wielding the power of the press to attack the Soviet Union in the developing Cold War that takes no prisoners.

The Soviets see Alsop as a fearsome foe who needs to be taken down. Alsop's weakness is his secret life of homosexuality.

Alsop's greatest defender is his brother Stuart, who is also determined not to live in Joseph's towering shadow.

Frankenfield gives Stuart a boyish eagerness and idealism that feels right. The two have several powerful scenes together as Joseph's uncompromising attitudes keep putting him in more difficult straits.

The bulk of the story is set between JFK's assassination in 1963 and the subsequent stall-out of the Vietnam War as public opinion turns against the fighting in 1968.

Spoiled by his decades of privilege as an insider, Joseph takes pride in supporting the war, even as his influence slips away. But the more he digs in his heels, refusing to change his position, the more vulnerable he becomes.

Also strong in smaller, though pivotal, roles are Carrie Hill as Susan Mary Alsop, Joseph's wife in name only, and Steve Wood representing the new generation of journalists as David Halberstam. Representing the Soviet side is Albert Riesgo as Andrei, charged with photographing Joseph in a homosexual relationship.

Emily Beaulieu makes an impressive debut in her first Mainstage production at LTW. She plays Abigail, the stepdaughter of Joseph and Susan.

“The Columnist” run through June 13, with performances at 7:30 p.m. Fridays and Saturdays, 3 p.m. Sundays, at Live Theatre Workshop, 5317 E. Speedway Blvd. All tickets are $20. For details and reservations, 327-4242, or visit livetheatreworkshop.org

Posted by TucsonStage.com at 11:45 PM