THIS "MERCHANT OF VENICE" IS RICH WITH MEANING 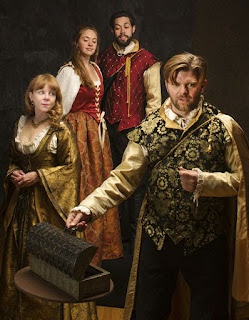 The determined lovers are (from left)  Patty Gallagher as Portia, Holly Griffith as Nerissa, Matt Bowdren as Gratiano and Ryan Parker Knox as Bassanio.

In our over-heated age of political correctness, Shylock and anti-semitism get all the attention whenever people start talking about Shakespeare's “The Merchant of Venice.”

Thankfully, the Rogue Theatre has opened a remarkably clear production that lifts the play to a loftier level of understanding. It's also wonderful that most of the actors have mastered the rhythms of Shakespeare's language.

Consequently, we can see in the high-definition performances of this beautifully costumed cast how Shakespeare was actually writing about the philosophy of commerce and society's competing layers of human value and material wealth. Competing much as they do today.

Along with Shylock's well-known determination to have his pound of flesh, other plot points have the passion of young lovers compared to gifts of silver and gold. Fidelity comes with a price, as well.

Even religion gets hit with the hard stick of economic supply-and-demand when one Venetian wryly observes “Converting Jews into Christians will raise the price of pork.”

As played at the Rogue, Shylock has become a man shrewd at business but blinded by his rightfully bitter hatred of Christians. By the end he has become a sympathetic figure done in by an unfair cleverness -- a Venetian law clerk's trick, basically.

As Cynthia Meier has written in the program's Director's Notes: “We perform 'The Merchant of Venice' in order to begin a conversation. Religious and ethnic intolerance surrounds us today as it did in the year 1600, when the play was first performed...we are forced to look truthfully at the treatment of our fellow human beings.”

Meier's directing is so precise that the language of the play is easier to understand. That Shakespeare vail of archaic language which normally clouds most productions is lifted here and this “Merchant of Venice” comes alive with meaning, with hidden political agendas and delicate hopes for believing in true love.

Joseph McGrath is masterful as the ever-calculating Shylock. We feel the bridling patience he must muster to act subserviently when dealing with men of a lesser mind.

In Shylock's famous speech that all men, whether Jew or Christian, have the same feelings, the same muscles and bones, the same blood flowing through their veins, we watch McGrath and remember daily video reports on the nightly news about other men lying in the street who have those same qualities.

David Morden finds depth as well in playing Antonio, the arrogant merchant who is so confident his ships will come in, he foolishly agrees to pay the moneylender a pound of flesh as collateral for a loan of 3,000 ducats.

All the lovers are handsomely cast: Ryan Parker Knox as Bassanio, a buddy of Antonio, who wants to properly woo Portia (Patty Gallagher); Matt Bowdren as Gratiano who hotly pursues Nerissa (Holly Griffith) and Heather Meza in the tricky role of Jessica, daughter of Shylock, who loves the Christian lad Lorenzo (Adam Taner Harris).

Gallagher shines in the cross-dressing scenes where Portia pretends to be a law clerk, finding the crack in Shylock's ironclad financial contract that guarantees his pound of flesh – and in doing so lets Antonio slip free.

The performance space as conceived by McGrath begins with a bare stage set on three levels that resemble a sixteenth century theater, bathed in soft light and shadows designed by Don Fox, matching elaborate costumes created by Meier to draw from the same period.

"The Merchant of Venice" continues through May 17 at the Rogue Theatre, 300 E. University Blvd., with performances at 7:30 p.m. Thursdays through Saturdays, 2 p.m. Sundays. An additional performance is 2 p.m. March 16.

Posted by TucsonStage.com at 3:41 AM