POWERFUL PERSONALITIES IN "CAT ON A HOT TIN ROOF" 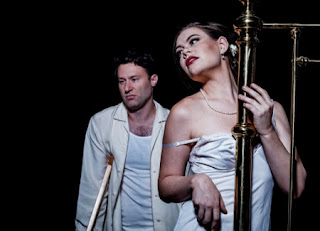 Robert Anthony Peters and Sara Jackson clash together as Brick and Maggie the Cat.

There is a mighty fine production of Tennessee William's iconic “Cat on a Hot Tin Roof'” playing at the northeast side Roadrunner Theater, 8892 E. Tanque Verde Road. Mark Klugheit as director has pulled one intense performance after another out of his dedicated cast.

Roger Owen is giving the performance of his life as Big Daddy, filling the stage with vituperance and a hatred for mendacity. A self-made man and damn proud of it, this Big Daddy is convinced there is no problem that can't be solved with forcefulness. Filling the stage with booming commands, Owen is definitely a Bigger Daddy.

His confrontation with severely depressed golden son Brick (Robert Anthony Peters) in the second act belongs in the Hall of Fame of Tucson Theater. Every sentence, every word, is boiling with anger accelerated by frustration.

Strategies of intimidation that served Big Daddy for decades as he built his Mississippi plantation of 28,000 acres of the richest land this side of the valley Nile, are failing him in the 1950s right here in his own home.

In the very bedroom where alcoholic Brick ignores his beautiful wife Maggie (Sara Jackson), Big Daddy demands to know exactly what is going on with his favored son, who was once the football-playing pride of the state. Why has Brick not sired an heir to this kingdom...as he is supposed to.

Peters, given the exceptionally difficult task of responding without having many words to say uses a fascinatingly nuanced body language, leaning on his crutch to express Brick's own sorrow. And to reflect the bitter homophobia of those times whenever confronted with his own response to the death of Brick's long and loyal friend Skipper.

As Maggie the Cat, Jackson brings her own different type of personality to the role and makes it work beautifully. Rather than the overheated sexuality defined by Elizabeth Taylor in the 1958 film, Jackson is more demure, more the proper southern belle, first happy and then desperate to get her husband hot by undressing in front of him.

This is very clever, because it frees Maggie from being seen as just another libido-driven female who can't help herself. In that defining third act, when the other three people in Big Daddy's life are curling the wallpaper with their efforts to fill the vacuum of Big Daddy's demise, Maggie's endgame perseveres.

“Cat on a Hot Tin Roof” continues through Feb. 3 at the Roadrunner Theatre, 8892 E. Tangue Verde Road, with performances at 7 p.m. Friday and Saturday, 2 p.m. Sunday.

Except on Jan. 24-27 when Roadrunner takes its act downtown for five performances in the Cabaret Space at the Temple of Music and Art, 330 S. Scott Ave.

All tickets are $20, with discounts available. Several performances have sold out. For details and reservations, 520-207-2491, or visit roadrunnertheatrecompany.org

Posted by TucsonStage.com at 10:22 PM