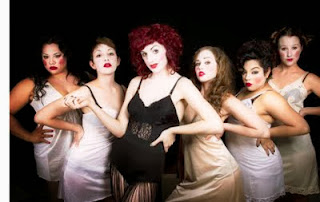 Lucille Petty (center) and the Kit Kat ensemble are the decadent heart of this "Cabaret" production.

You absolutely must see Christopher Johnson’s spot-on gender-mangling interpretation of the Nazi musical “Cabaret.” Toss out the sparkly enthusiasm of Liza Minnelli and the smirky Emcee Joel Grey that everyone is used to.

Pour on the power and the bite of sleazy personalities completely bereft of any moral compass as entertainers at Berlin’s moldy Kit Kat Klub, powering down the Highway to Hell – only to be run over by the Nazi war machine barreling down the same highway so much faster with way more firepower.

As the sadly resigned ringmaster, Johnson with shaved head and white face paint is as great as we all knew he would be. Can you believe this costumed character making fun of every respectable thing in life is back stage between numbers shooting up more drugs?

But it is Lucille Petty who steals the show as Sally Bowles, her creature a harrowing vision of the extremes some people can reach when they are so determined to avoid reality.

Thanks to Broadway’s compulsively happy musical theater history, over the decades Kander and Ebb’s “Cabaret” moneymaker has been stripped of its bitter irony. Most often, when those bright red banners with the giant swastikas are unfurled at the end, the impact is like “Oh, yeah, that’s right.”

There is no sugar coating in this production, presented by the Winding Road Theatre Ensemble.

Of course, we all know the show. Opening on Broadway in 1966, “Cabaret” has found success at every level – most often as high-energy entertainment with that Nazi kicker on the end.

So when Johnson comes strutting out after that clanging cymbal introduction, it’s definitely time to settle back and buckle up.

Co-directors Johnson and Evan Werner are convinced you can’t have too much decadence. Choreographer Mickey Nugent shares their vision, as do the seven Kit Kat Klub dancers who perform with the weary inevitability of lost souls.

Standing for everything good and true is the traditional romance of Herr Schultz (David A. Johnston) and Fraulein Schneider (Susan Arnold). These fine actors catch the heart breaking beauty of their roles.

Nick Trice as the idealistic American writer Clifford adds a contrasting stability to bohemian Sally. Dani Dryer gives the foreshadowing Nazi supporter Ernest Ludwig all the menace that he needs.

Though Sally and the Emcee are the point persons in this play, the production is a complete ensemble effort. Everyone is doing their part, creating unforgettable theater that people will be talking about long after the curtain drops.

For details and reservations, 520-401-3626, www.windingroadtheater.org

Posted by TucsonStage.com at 7:58 PM