GRAB ONTO THIS "LOOT" 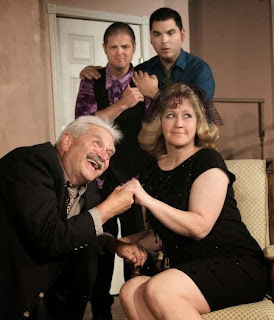 In back, Dennis (Stephen Frankenfield) and Hal (Steve Wood) get the drop on Mr. McLeavy (Michael F. Woodson) and romantic Nurse Fay (Rhonda Hallquist) in "Loot."

Can there be such a theatrical creation as an intellectual farce? The controversial British playwright of the 1960s, Joe Orton, figured there could be.

So he wrote “Loot,” a farcical mash-up of having fun on stage with a dead body while the dialogue drips with bloody swings at the hypocrisy of trusted social institutions of the times.

For years, the 34-yearold Orton’s play writing was overshadowed by his own murder in 1967 at the hands of his lover Kenneth Halliwell.

Now at Live Theatre Workshop we can watch as Anette Hillman wades into this mélange of cultural change for “swinging London” in the 1960s, directing a fearless cast of Steve Wood, Stephen Frankenfield, Michael F. Woodson, Rhonda Hallquist and Nick Trice – with a guest cameo by Ed Fuller as police officer Meadows.

While the jokes aren’t in the punch lines so much as they are in the outrageous observations of these four characters, the physical rounds of hoisting (and foisting) a corpse, a coffin and a large pile of money all about are pure farcical fancy.

The set-up begins in the funeral home where Mrs. McLeavy lies in state. Some say she was murdered by the seven-times-widowed Nurse Fay (Hallquist). The nurse hoped to make Mr. McLeavy (Woodson) her eighth husband. But you know how people can talk.

At about the same time, the McLeavy’s son Hal (Wood) has just robbed the bank next door to the funeral home. Hal bursts in with a small suitcase over-stuffed with money, and with his more aggressively larcenous accomplice Dennis (Frankenfield), who is also the bisexual undertaker.

Their banter and confusion get kicked up a notch when Inspector Truscott (Trice) arrives. Wanting to slice through the legal bother of getting a search warrant, Truscott announces himself as being from the Metropolitan Water Board (since water officials can enter any home without any warrant).

As you may recall, the earlier 1960s (the “Mad Men” era) were known for their rigid dedication to middleclass religious values and syrupy pop songs. Virtually all of these (police corruption is rampant, the Catholic Church is out, homosexuals are in) get mercilessly skewered in the course of an evening with “Loot.”

Audience members who feel younger – and, thus, more enlightened – will get an extra laugh at the expense of such old hat attitudes toward these formerly solid pillars of civilization.

This strong cast of LTW favorites keeps up the energy and the accents from start to finish. The dead body wrapped up like a mummy does get banged around a lot, though.

“Loot” continues through June 7 with performances at 7:30 p.m. Fridays and Saturdays, 3 p.m. Sundays, at Live Theatre Workshop, 5317 E. Speedway Blvd. Tickets are $18 with discounts available. For details and reservations, 520-327-4242, or visit www.livetheatreworkshop.org

Posted by TucsonStage.com at 4:06 PM