"GHOSTBLASTERS" SHAKES UP THE ECTOPLASM 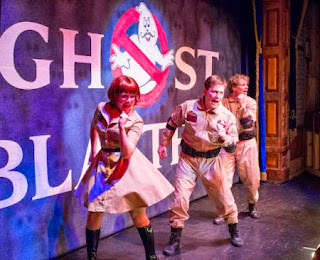 Dancing away the ghosts are (from left) Tarreyn Van Slyke, Mike Yarema and Jake Chapman.

Looking back on the 1980s through the jaunty eye of Gaslight Theatre can only mean there is a handlebar mustache on that quizzical ghost peering through the red circle of the international sign for “No Ghosts Allowed.”

That and a dancing green blob of slobber with one glittering white glove singing “Thriller;” a silvery-white party girl insisting “Ghosts Just Want To Have Fun;” and a zombie-esque guy with sunken eyes and spiky, peroxide hair like Sting.

Really, you just have to be there, which you should for the Gaslight’s summer run of “Ghostblasters or I Ain’t Afraid of No Ghosts” playing through Aug. 31—a production finding unabashed inspiration from that iconic movie starring Bill Murray, Dan Aykroyd and Harold Ramis.

At the Gaslight it is Peter Van Slyke as writer and director, with Katherine Byrnes doing the choreography and Tom Benson the stage design.

All the roles are double-cast, but at the performance I attended Mike Yarema as Zach and Jake Chapman as Wally played the professional ectoplasm eliminators. They were joined later by fearless female and temporary secretary Susie (Tarreyn Van Slyke).

We first meet Zach and Wally as a couple of scientists conducting experiments to deliberately create a ghost. Hey, it could happen. More odd is how no one ever holds out a telephone to these Ghostblasters and shouts, “Call for Wally!”

At first, though, all that these two scientists discover is how success in the laboratory can be so darned elusive. It doesn’t help that Mayor Witherspoon (David Orley) will be turning into Igor the Destroyer later on, and the mayor’s loyal assistant Randall (Charlie Hall) has given his spirit from the Dark Side a tone-deaf name like Beeglegoose.

Proving herself to be larger than life (in any form) is Heather Stricker as Sydney Powers the library art curator. She’s never met a ghost she didn’t like. Also bringing new life to the library’s shadowed halls is Janee Page as the former librarian, Lavinia.

It does take a few scenes to get all of this set up, but then – POW! Once all the waves of glowing ectoplasm are released things start jumping, especially the bloby-green ghost called Slobber (Jacob Brown) and that punked-out science professor (Joe Cooper).

Some fresh special effects have been called on to juice up the action as Evil tries to trump the forces of Good. Deep in our hearts and scrunched down in our seats, we know that will never happen. But black-hearted Igor does look pretty convincing.

As for the Gaslight’s traditional aftershow Olio, we drop in on Regis Philbin hosting another round of “You’ve Got Talent” with Joe Cooper as the voluble host.

Instead of those quirky judges, the Gaslight’s own audience gets to cheer or boo as they are inclined. A wave of booing and Regis slams a buzzer to light up a noisy red X. Get three Xs from Regis and you are out!

Not all the talent made it to the end of their songs. But among the titles performed by various cast members in outrageous costumes and wigs are “Sharp Dressed Man,” “(Do the) Conga” and “Ice Ice Baby.”

Performances continue at various times Tuesdays through Sundays at the Gaslight Theatre, 7010 E. Broadway, until Aug. 31. Tickets are $18.50 general admission; $16.50 students, seniors and military; $8.50 children 12 and under. Reservations recommended. For tickets and information, 520-886-9428, or visit www.thegaslighttheatre.com

Posted by TucsonStage.com at 6:59 AM