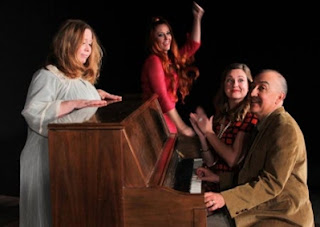 Arriving on stage with all the surreal energy of a ttheatrical postcard from the abstract edge of hippie theater in the 1970s, Live Theatre Workshop's sad yet extremely satisfying production of John Guare's “The House of Blue Leaves” gives the second half of Tucson's theater season a boisterous kick-off.

Being the directorial debut of popular Tucson actor Roberto Guajardo makes the artistic achievement even more special as he keeps a cast of 11 players moving through a chaotic story that is either tugging at your heart or clutching at your throat.

“House of Blue Leaves” premiered off-Broadway in 1971, five years after the Summer of Love, the blazing race riots, the bitter anti-war riots, the assassinations of Martin Luther King and Robert Kennedy and that mostly sad news from the Vietnam War itself. Guare's deliberately distorted sense of reality somehow caught the uncertainty of the times themselves.

Artie Shaughnessy (Keith Wick) is a native New Yorker who dreams of being a famous songwriter. He obviously has no talent, but he's too tough to quit. So Artie pays the bills by working as a zookeeper, sort of an urban farm boy.

But Artie's childhood pal Billy (Bob Kovitz) is a successful Hollywood director Artie hopes to lean on for help. After all, he's got Billy's personal phone number.

In the meantime, Artie feels dragged down by his helpless wife Bananas (Avis Judd), severely depressed and addled by the drugs Artie keeps feeding her.

This harsh relationship is exacerbated by the tawdry Bunny (Shanna Brock). She's been Artie's lover for two months, openly insulting to Bananas and committed to promoting Artie's connection with Billie so she can get to Hollywood, too.

All three actors are doing some of their finest work ever in establishing both the hopes and the helplessness of their characters. In the first act all three have stunning monologue scenes directed at the audience.

On the surface, fame seems to be their addiction. But their struggle really is for survival. All three actors can draw us so quickly into their worlds the experience becomes quite compelling.

Painfully sensitive is Judd's creation of Bananas. Somehow, using only the simplest of gestures, she conveys a heart-wrenching complexity in the first act that powers the second act.

Like most of us in the early 1970s, Bananas doesn't know exactly what is going on, but senses she is in really big trouble.

Act Two provides some context as Ronnie (Taylor Rasher) comes home from the Army unexpectedly, just as a trio of befuddled nuns appears on the roof of the adjacent building, hoping to get a better view of the Pope's procession through the city. And if his holy visit from Rome can't save us, what can!

That's the comedy part, and welcomed it is. As the director, Guajardo finds laughter in confusion, optimism in heartbreak and a bright future for his emergence as a director.

“The House of Blue Leaves” runs through Feb. 10 with performances at 7:30 p.m. Thursdays through Saturdays, 3 p.m. Sundays, at Live Theatre Workshop, 5317 E. Speedway Blvd. Tickets are $20, with discounts available. For details and reservations, 327-4242, or livetheatreworkshop.org

Posted by TucsonStage.com at 6:32 PM