PLAIN SPOKEN POWER AT THE ROGUE IN "GRAPES OF WRATH" 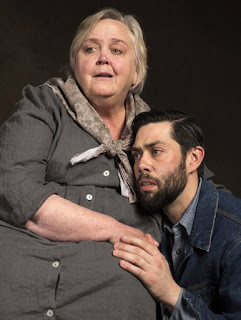 Ma (Cynthia Meier) holds the Joad family together in hard times, Her son Tom (Matt Bowden) does just the opposite.

We remember the film adaptation for “The Grapes of Wrath” with its harsh cinematography of the raw life faced by the Joad family struggling during the Depression and through all their Dust Bowl miseries to reach the promised land of California where there would be jobs and water – only to be met by hardships of a different order.

All of those pitched emotions (if not the cinematography) are present in the Rogue Theatre's sprawling production of the stage adaptation by Frank Galati of John Steinbeck's iconic novel.

True to the Rogue's mission of using very simple stage designs, a nearly bare performance space contains all the action. Half of this space is a turntable about ten feet in diameter, on which is set a long table, a couple of benches and a few seats, with a canvas draped across the top, to become the rickety truck on which the Joads piled all their belongings, family members and a few friends.

A willingness to work was far more important then the ability to do so. During the Depression many rural families lost their farms. Then with no place to sleep and no urban job skills to gain them employment, these little groups struck out on their own like innocent tribes facing hostile forces.

The ones who got a toe-hold somewhere were immediately better than their peers, Desperation bred contempt. Family members would only trust each other. Basically they were all a bunch of homegrown refugees, kept on the move because none of the respectable folk would let them settle down.

There are no central figures in this story. A few are more prominent than others, but “The Grapes of Wrath” has no counterpart to Scarlett O'Hara and Rhett Butler. Instead, we are pulled into many facets of struggle, from people too old to travel, like Granma (Molly McKasson) and Granpa (Jay Hornbacher) to the seething of anger of young Tom Joad (Matt Bowdren), incensed by the injustice all around him.

As the play is set up, Act One details the hardships of the Joad family working up the courage to strike out for California, then overcoming the challenges of getting there. David Greenwood and Cynthia Meier as Pa and Ma hold their tuckered little band together, assailed from all sides, clinging to the truck as if it was their life-saving ship on stormy seas...which it was.

Act Two is facing an unwelcoming society that had no work and precious few places to stay for the night. There were so many more workers than jobs, everyone was being exploited and abused by everyone else. Historians tell us Americans were asking if there even was an American spirit anymore.

Much of this questioning connects directly to America's shaken image of itself today. We watch the Joads and we see ourselves, or our parents. We are reminded of our neighbors and our government.

This is the value in seeing the Rogue's production of “The Grapes of Wrath.” We can look into that crystal ball of a stage, see those faces and the indomitable spirit confronting such long odds, and see our own hope for the future.

Performances continue through Jan. 28 at 7:30 p.m. Thursdays through Saturdays, 2 p.m. Saturdays and Sundays, at the Rogue Theatre, 300 E. University Blvd.

Tickets are $38. Student rush tickets $15 when available, on sale 15 minutes before curtain. For details and reservations, www.theroguetheatre.org, or 520-551-2053.

Posted by TucsonStage.com at 2:37 PM