"ON YOUR FEET" IS THE PERFECT TITLE FOR THIS BROADWAY SHOW 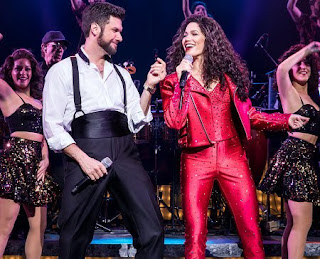 If you've ever dreamed of dancing in the aisles at the University of Arizona's Centennial Hall, now is the time to check that dream off your list. Broadway in Tucson is presenting the perfectly named “On Your Feet! The Emilio and Gloria Estefan Broadway Musical.”

Not only is the Estefans' Cuban pop music a soaring sugar high (they are jamming on “Conga” and it isn't even intermission yet), but longtime member of the Miami Sound Machine, Clay Ostwald, has the sweaty-hot stage band sounding both crisp and frantic, while dance captain for the Broadway show, Skizzo Arnedillo, keeps eight dancers getting physical with jaw-dropping intensity.

If that's not enough, tropical colors in the sets and costumes combine with a solid mix from the sound crew to pump up Centnnial's Hall's challenging acoustics.

We're talking a story of exceptional good times here. A Cuban immigrant family makes it safely to Miami after Fidel Castro takes over their country. Cuban teens start a popular band. Gloria Fajardo is a shy girl with a terrific voice. Emilio Estefan is the bold young man who leads that popular band. Gloria's grandmother Consuela gets the two together.

Emilio is played by Ektor Rivera, who had the role on Broadway, giving his performance plenty of sass. Much sweeter is Christie Prades as Gloria. Her part calls for a different kind of determination, an internal bravery inspiring in its own way as she first struggles to be a bold performer, then to be a survivor.

But performance-wise, Broadway veteran Nancy Ticotin as Gloria's mom, also named Gloria, steals the show with a trio of big numbers – one set in Havanna depicting her own career as a young and popular nightclub entertainer robbed of her career when Castro's revolutionaries seized the government and changed everything.

Gloria's mom begins as the villain of this story. Bitter about her own career, she wants a safe and solid life for her daughter. But singing her songs, Ticotin is all about a mother's heart. By the show's end she is melting the audience with her love for her daughterl

The program lists 25 songs, beginning with “Anything For You,” that comprise the soundtrack for this Cinderella story set to Cuban rhythms. Most of the first act deals with the band's struggle to cross over from the Latin music charts to the big money getting hits on the U.S. pop charts.

It is impossible to watch these Cuban immigrants live out the American dream in depicting this true story from the 1980s without thinking of the present hopes of new immigrants gathering on our own southern border with Mexico. Every one of those people has daring hopes, as well.

“On Your Feet!” is so good at making the Estefan dream come alive, you will feel the jolt near the end of Act Two when a horrific accident in the band bus nearly ends Gloria's life.

Her struggle and recovery are handled so seriously, the entire cast with all those dancers and musicians jumps in for a celebration to brighten the show's ending with a few extra numbers, an explosion of confetti and irresistible party invitations to keep dancing in the aisles and at your seat.

Posted by TucsonStage.com at 8:09 AM