"ERMA BOMBECK" WHERE COMEDY IS COURAGEOUS 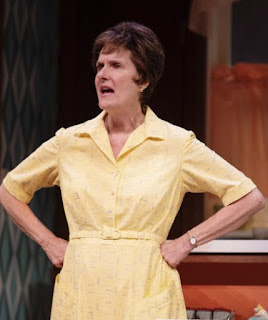 Jeanne Paulsen is Erma Bombeck all by herself on a stage set straight out of 1960s suburbia.

Although many women in today's terminally conflicted society may not want to remember it, there was a time less than 70 years ago when stay-at-home wives took great pride in organizing and maintaining their tidy households in the suburbs.

An entire culture was created around images of happy homemakers using labor-saving appliances and other modern technology to keep their families thriving while they always wore a smile, high heels and a string of pearls in the middle of the day.

Then came the 1960s and newspaper columnist Erma Bombeck. A child of the Great Depression and survivor of the War Years, Bombeck dreamed of becoming a writer. But by the early 1950s, found herself instead being a suburban wife in Dayton, Ohio, with a husband and youngsters to look after.

Determined she would be a person who made lemonade when life kept giving her lemons, Bombeck fought back. Her weapon was humor, and she became a nationally famous newspaper columnist and humorist. A writer who never left her front yard.

Tony Award-nominated Jeanne Paulsen wears a sunshine yellow house dress as Erma, alone onstage as she must have often felt alone at home, surrounded by the swirling noise of children and endless lists of chores,

“I didn't need to sleep,” she remembered. “But I did need to do the ironing.”

Throughout her 75-minute performance she was endlessly tossing off throw-away lines like so much comedy confetti.

Amazed at how quickly children can learn to beat the system, she notes of her young son, “If he wanted extra pancakes, he coughed on his sister's plate.”

On the other hand, television's arrival in the 1950s was a godsend. “Putting kids in front of the TV is like hypnotizing chickens.”

Playwrights Allison and Margaret Engel concocted a clever way to present Bombeck's evolving attitudes in her war with reality as American culture began to change radically in the Sixties.

Instead of putting Bombeck's private life on stage, nearly all of Paulsen's dialogue is taken directly from Bombeck's columns and books.

She isn't telling stories about herself or revealing any family secrets. She is commenting on life as she originally observed it, finding laughter in the unsentimental truths that made her columns popular with millions of readers.

Noting that she began to get criticizism for not acting devoted to her children, Bombeck said, “I love being a Mom,” and we believe her. “I love you enough to say 'No','' she adds. “Even when I know you will hate me for it.”

So we follow Bombeck's life from being a newlywed learning to cook...”Our smoke alarm told him when dinner was ready”...to that heart-stopping moment when she almost sucked up a hamster in the vacuum cleaner, to her view of the onrushing sexual revolution..."My wedding ring was a status symbol in the maternity ward.”

In keeping with ATC's promise to make theater relevant to important liberal issues in these changing times, we also learn to appreciate Bombeck's feminist platform on the national stage, taking a prominent place with other dynamic leaders in working for ratification of the Equal Rights Amendment.

So by the play's end – even if Bombeck might still think she's just another suburbanite – we see she is a towering hero of the 'burbs. Not so much for what she did around the house, but for the strength her newspaper columns gave all other women who faced the same challenges every single day.

"Erma Bombeck: At Wit's End” runs through Nov. 10, with performances at various times Tuesdays through Sundays in the Temple of Music and Art, 330 S. Scott Ave. Tickets are $25-$90. For details and reservations, 622-2823, or visit arizonatheatre.org

Posted by TucsonStage.com at 3:40 AM