"FREEDOM LEAGUE" IS OUT OF THIS WORLD 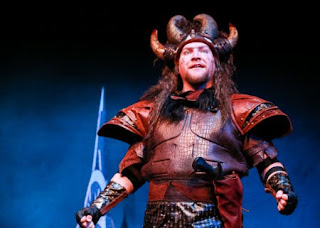 Todd Thompson gets to wear the costume of Zagoor, King of the Wrebulons.

Super-heroes are all over the place at Gaslight Theater, just like they are at your local movieplex. Only, at Gaslight, they are real people. Sort of like super-heroes unplugged.

Special effects (not to be confused with digital effects) have always been an imaginative specialty at the Gaslight. Ocean waves, volcanoes erupting sheets of on-rushing lava, spacecraft soaring over your head, arrows and knives that seem to fly across the stage and stick in a wall, tons of stuff like that.

Just opened, “The Freedom League” seems to have an extra dose of special effects, which does add to the fun. I mean, we already know there's no such thing as a super-hero, right?

None the less, Mega Man, Lady Liberty and the Streak get into some genuinely sticky situations and make a convincing case that sometimes extreme crises will call for extreme solutions.

For example, with Doom impending, the only chance our Super-friends have for survival will be if they can make time go backwards. Not a problem. The Streak leaps into low orbit around Earth, running really fast in the opposite direction of the globe's rotation.

All the Gaslight shows are double cast. The performance I attended had Jake Coffin looking very believable as the red-and-gold clad Streak. Mike Yarema with that cute little Superman curl on his forehead becomes Mega Man, disguised by day as mild mannered news reporter Brent Baker.

They are joined by Cait Rudd as bold Lady Liberty, whose daytime disguise is the strait-laced business secretary Alexis Archer. Clearly a fan of traditional superherodom, this Lady wears powerful bracelets ala Wonder Woman to shield herself from all incoming projectiles.

But really, the actors who get to wear the coolest costume are Todd Thompson, Charlie Hall and Eric Du to play the fearsome alien warrior Zagoor, King of the Wrebulons. Thompson had the honors when I was there.

Zagoor is perpetually angry, determined to destroy Earth and all that, so he flaunts a fearsome leather-clad Viking look, topped off with a helmet that has two massive sets of horns. Magnificent.

By intermission the sides supporting good and evil are clearly drawn, the battle lines laid out and the song list ready. This will be a proud moment for “Truth, Justice and the American Way,” set to a romping rock 'n' roll beat.

Some song titles that might come to mind hearing these Gaslight renditions are “Hey Hey, We're the Monkees,” “It's Not Unusual,” “You're No Good,” “Dancing Queen” and “One Fine Day.”

But do not miss the Star Seekin' Olio, either. Dave Orley is back with his brilliant take on Ed McMahon, his booming laugh and commentary, as the host of a singing contest. Audience applause decides the winner, with an official volume meter measuring the response to each contestant.

On the bill are such names from the 1980s as Cindy Lauper, Boy George and Madonna. Ed is also passing out some ear candy jokes.

“At the beach today, a sad story when the lifeguard wasn't able to save a hippie from drowning. The lifeguard tried to save him, but the hippie was just too far out.”

“Did you hear that Star Wars has a restaurant now? I went there the other day and ordered a Wookie steak. I thought it tasted chewy.”

Posted by TucsonStage.com at 7:54 AM