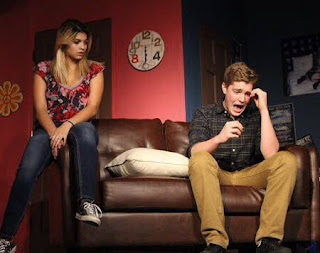 The biological insistence on sex in the life of college students ignites our contemporary culture of rudderless morality in the edgy Acting Innocent Theatre Company production of “Really Really” by 27-year-old playwright Paul Downs Calaizzo. This vigorously sincere cast gives his lines the ring of truth.

Acting Innocent is a group of exceptionally talented high school friends who spontaneously decided to put on a play – actually three plays – before they went off to college. What will happen after that? Well...probably Acting Innocent will disband and life will happen.

But sometimes you just gotta do what you gotta do. After the company staged two praise-worthy productions this season, Acting Innocent is now ending its incandescent Mayfly life with three weekends of this show's gritty look at how rabid campus realities can smother life-long friendships.

Was youth ever as carefree as sentimental adults like to remember it? Probably not. But the pressures sure were different. Sex, drugs, rock 'n' roll and anything else you can get away with are now a permanent part of the adolescent landscape.

That vaguely defined term “Millennials” is more crisply described here as the Me Generation, which feels about right. We are only in year 2016, so the oldest any true Millennial can be is 16.

To these young adults, life is not about achieving so much as it is about surviving. Even the kids with wealthy parents who own stores and factories aren't motivated to make additional millions building still larger stores and factories. Somehow the joy of achievement has turned into the isolation of paranoia.

The plot has kind of a Rashoman structure that centers on the search of intention expressed during a rules-free party of escaped inhibitions when Leigh, in a committed relationship with Jimmy, has sex with Davis (one of the hottest guys on campus).

Or did they? Calaizzo doles out the facts like a blackjack dealer, raising the ante with each disclosure. Davis doesn't say he did have sex with Leigh, but is happy that his buddies believe it happened.

Then one of those buddies tells Jimmy that Leigh was in bed with Davis.

But when Jimmy confronts Leigh with the story, she acts outraged, claiming she was raped. Davis says he was drunk and can't remember.

But then school authorities learn of the wild party and what might have happened between Davis and Leigh, so they call Davis into the office for further questioning. It becomes his word against hers.

But whether it actually was consensual sex or something less, everyone is forced to take sides and loyalties are challenged. Suddenly all that pop song idealism of standing by your man, being true to your school, sticking with your pals, going down with the ship...whatever....has real world consequences.

Which is the playwright's point. It doesn't matter which is the guilty party, for all share the blame. What matters is to have an appreciation for the landmine of life-destroying opportunities lurking behind every conversation, every pop quiz, every research paper and absolutely every party.

“Really Really” runs through June 26, with performances Fridays and Saturdays at 7:30 p.m., Sundays 2 p.m., in the Community Playhouse, 1881 N. Oracle Road. All tickets are $15, available at the door and online. For details and reservations, visit www.actinginnocent.com

Posted by TucsonStage.com at 7:51 AM