BROWN AND WHITE PEOPLE TREAT EACH OTHER BADLY IN "NATIVE GARDEN" 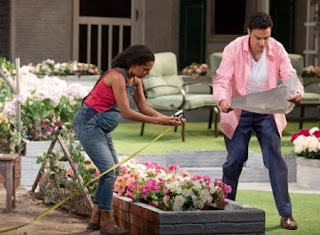 Charged with pleasing theater audiences in liberal Tucson and conservative Phoenix, Ivers is using this play by Karen Zacarias' dramatizing contemporary cultural conflicts to compare the reactions of these two cities.

But not to worry, just know this is also a zippy production set in a residential Washington DC neighborhood. Directed by Jane Jones with a super-realistic set design by Carey Wong, the jokes come pouring in quick as any Neil Simon show and no thinking is required.

However, for the rumination-inclined...Bill Geisslinger and Robynn Rodriguez are perfectly cast as an older, assertively patrician white couple Frank and Virginia Butley. Opposite them are Arlene Chico-Lugo and Keith Contreras, also perfectly cast as Tania and Pablo Del Valle, a brighter, younger and equally well-educated brown couple who enjoy their more casual lifestyle.

“Native Gardens” is written as a 90-minute non-stop confrontation between neighbors who are separated only by a scrap of chain link fence. All those jokes are the sugar coating for what becomes, essentially, a battlefield of issues regarding race, a history of white domination and the feminist struggle for respect.

Zacarias makes no attempt to plow a middle ground, balancing the opposing needs of both sides to encourage a fertile future of mutual understanding.

Most of the good jokes are made at the expense of the Butleys, portrayed as representing the patronizing establishment, happily sizing up this new couple who buy the nearly identical home next door.

Only that home, so similar in its architecture, has been badly treated through many years of being rented to careless Georgetown University students.

“This is our fixer-upper,” says Pablo right off, making clear he's got the money to get the job done. Pablo is a young-ish lawyer from Chile, hired by an American law firm through its “outreach program.” Pablo's plan is to work so hard and be so successful he will soon become a full partner in the firm.

Meanwhile, the Butleys hear their new neighbors speaking Spanish, see they have brown skin and figure they are Mexicans.

Tania, however, is an American born to a family of early settlers in New Mexico. Generations back, her family became American citizens by default when the border was drawn.

Tania lives this conflicted history, feeling proud to be nearing completion of her PhD in identity politics. She is also pregnant, expecting her baby at any time.

After we meet Bill proudly pruning his formal patio garden full of non-native flowers, we learn he dreams of winning this year's neighborhood trophy for Most Beautiful Formal English Garden.

Meanwhile, Tania talks of wanting to bring her barren backyard back to life with lots of different native plants, including native weeds that have an important role in nature's life cycle, letting everything grow not in rows but however it wants.

Soon after, Pablo and Tania innocently discover their property line actually runs down the middle of Bill's lovely, symmetrical flower beds. Somehow over the past many years, Bill's beautification has slowly expanded two feet onto the property of those uncaring college students.

Who knows when it happened. But now the expansion has been discovered and suddenly these proud, brown, indignant new property owners want their land back immediately.

"Native Gardens" runs through Sept. 29, with performances at various times Tuesdays through Sundays in the downtown Temple of Music and Art, 330 S. Scott Ave. Tickets are $25-$90. For details and reservations, 622-2823, or visit arizonatheatre.org

When: Various times through Sept. 29.

Run time: 90 minutes with no intermission.

Posted by TucsonStage.com at 5:06 AM