SCIENCE CONFRONTS THE POPE IN "GALILEO" 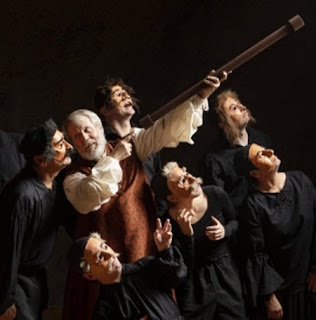 Once Copernicus declared the Sun to be the center of our solar system, the entire universe was up for grabs. Along about this same time, the Dutch figured out the optics of magnification and – voila – they introduced the telescope.

Now the Rogue Theatre has added the dynamic personality of iconic astronomer Galileo Galilei in producing Bertolt Brecht's dramatization of science vs religion and politics in “Galileo,” using the English translation by Charles Laughton.

We in the audience with cell phones in our laps receive a rich evening of hearty theater led by Joseph McGrath in the title role.

Looking every bit the towering figure of a man completely confident of his superior intelligence, McGrath follows the scuffling path of insisting Earth revolves around the Sun as his concept grew from being a silly idea worthy of the village idiot to becoming in 1633 a defining confrontation with the Pope's own Eurocentric view.

Just like the Sun itself, the role of Galileo is the center of Berthold Brecht's 2-hour 20-minute play. He is onstage nearly the entire time, circled by a dozen actors playing a robust variety of roles, some serious, some hilarious.

Many of this myriad lot wear eccentric costumes and artfully designed masks with exaggerated noses and other features.

Eventually everyone onstage gets sorted out as being either for or against Galileo and his controversial science. At the time it was a very easy decision, for anyone could see the Sun revolved around the Earth. That was plain as day.

If you think today's corporate executives of the world's factories make a powerful adversary opposing global warming, try going against the Pope in the 17th century when the telescope itself was a new idea and Christian theology was the enforcer for all human behavior.

Cynthia Meier as the Rogue's director keeps all the moving bodies moving as precisely as the celestial bodies themselves while Galileo (as much of a con man as the court politicians, and just as agile) holds center stage with his constant smiling, cajoling, strategizing, advancing, withdrawing and...finally, sadly...accepting that his understanding of how the Sun, Moon and Earth align were too advanced for anyone else living in those times.

Who could argue with that?

And so, accused of heresy by the Church and facing torture, Galileo agreed he would recant his beliefs. But he also refused to change his mind. Under house arrest for the rest of his life, Galileo wrote extensively on his theories and observations.

Sitting here in the year 2018, it is easy to feel smugly superior to the Pope's insistance on being at the literal center of the universe. Then we remember today's quandry over global warming. Once again, science is on one side and world politics on the other.

Human nature, as it was in the 1630s, is caught in the middle. Truly, the more things change the more they stay the same.

Posted by TucsonStage.com at 3:45 AM