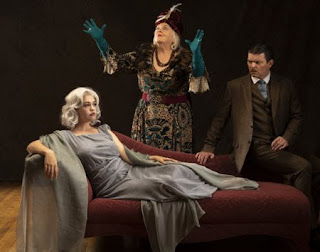 The Rogue Theatre has let its own blithe spirit out of the bag in this production, going for the most detailed stage set the company has employed in years.

From the back of the stage a soaring two-story fireplace dominates the theater. Off to the right is a large, billowing curtain. Complimenting these elements are a writing desk, a book case, a long sofa, a round draped table and chair, two straight-backed and upholstered chairs, plus a massive chest containing a wind-up phonograph. There is also an accompanying piano and a musical saw.

In 1941, with London enduring Germany's nightly bombing raids, Coward was inspired to write a spirit-lifting comedy for his native England in the depths of World War II. He turned to another battleground, the still-respected institute of marriage and turned it inside-out.

Culturally, to reach the proper attitude for “Blithe Spirit,” we in 2019 must do some serious time-traveling back to that general period of grace and lace in England between the World Wars, when a marriage was supposed to endure forever and divorce was considered a desperate last resort.

Infidelity was a serious no-no, as well. For those less-than-happily-married couples, keeping tabs on a wandering mate could fill every waking hour. The deeper you can get into such a defining mindset, the funnier will seem this Roguish production directed by Joseph McGrath.

Our play opens in the conspicuously upscale home of the popular novelist Charles Condomine (Ryan Parker Knox) and his second wife, Ruth Condomine (Bryn Booth). Charles' first wife Elvira died after only five years of marriage. She had a heart attack while laughing too enthusiastically during a BBC Light Programme on the radio (that's also one of the jokes).

To describe the play's set-up quickly, Ruth is a very serious person who would be hard pressed to laugh at anything. She and Charles have now been married seven years. He's beginning to feel the strain.

So when Madame Arcati accidentally calls back Elvira (Holly Griffith) from the Land of Those Who Passed Over, Charles is rather happy to see her. Ruth is not so happy. Actually, Ruth can't see Elvira anyway. Only Charles can do that.

Coward's clever word play fills the conversation as Ruth demands Elvira go back where she came from...while Charles, beginning to enjoy himself, wonders if he might have the opportunity for a menage a trois that really would be out of this world.

Madame Arcati is outraged when she discovers Charles may have had an ulterior motive for inviting her to his home for a séance in the first place. Madame Arcati takes her professionalism quite seriously.

Of course, none of that is any help in getting Elvira back over to the other side. She doesn't even want to go. Griffith plays Elvira as a vengeful sort, determined not to let Ruth enjoy her husband.

Booth has some great lines as the rightful wife. Her confrontational scenes with Knox are top notch. In that regard, we begin to root a bit for the playful Charles, trying so hard to get a little fun back into his own life.

Nevertheless, it is Madame Arcati who takes the cake, steals the show, gets the biggest laughs. All by playing it straight.

Posted by TucsonStage.com at 11:42 AM