THE STARS INSPIRED HER TO TAKE THEIR MEASURE IN "SILENT SKY" 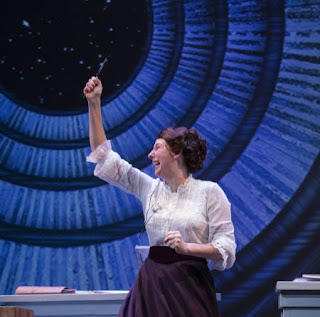 photo by Tim Fuller
Henrietta Leavitt (Veronika Duerr) in a moment of triumph at the Harvard College Observatory.

In the early 1900s Leavitt was a recent Radcliffe College graduate hired as a Harvard College Observatory staffer to work with other women in the generally thankless job of cataloging thousands of random stars, giving each one a specific location and other scientific values.

The ambitious Leavitt, working obsessively, carried her research much further. Eventually she hit upon a way to accurately calculate the distance between stars and ultimately to calculate the actual size of the Milky Way and beyond.

It is a wonderful story of hard work leading to triumph, not just for the field of astronomy but for the achievements of women in a science discipline dominated by men.

But as a theatrical event, “Silent Sky” spends a lot of time in Act One explaining the procedures of how her star study works, the complications involved and why men at Harvard want to control everything. Soon enough the play begins to feel more like a lecture. Then the second act begins. It is lots livelier.

So don't leave early. Be sure to stay for the wonderful ending with its swooping special effects that carry the audience up to the stars themselves, right along with Leavitt and her galactic success.

Veronika Duerr as Leavitt creates a sympathetic character genuinely thrilled by learning more about such a mysterious place as outer space.

When her more home-bound sister Margaret (Victoria Grace) tugs at Henrietta to care more about their family and their father, we feel Henrietta torn between her two loves of work and her family responsibilities.

Henrietta's colleagues at Harvard are Annie Cannon (Inger Tudor) and Williamina Fleming (Amelia White). Her Observatory boss is Peter Shaw (Nardeep Khurmi), an insecure guy often more concerned about maintaining the observatory's chain of command in the lab, with himself at the top.

There is a lot of astronomy information to be absorbed here, but Stangl as director makes sure the emotional emphasis stays on these women. Their dedicated work in the lab is balanced with the genuine concerns of Margaret to keep her family together.

Without families on Earth, after all, who will be inspired by the stars?

"Silent Sky” runs through Nov. 9 at the Temple of Music and Art, 330 S. Scott Ave., with performances at various times Tuesdays through Sundays. Tickets are $40-$70. For details and reservations, arizonatheatre.org or 622-2823.

Posted by TucsonStage.com at 11:41 AM