A STAGE FULL OF HAMLET, ROSENCRANTZ AND GUILDENSTERN 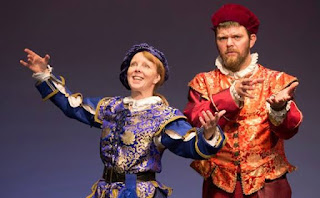 The Rogue Theatre continues to set new levels of excellence in showing what Tucson's pool of talented actors can achieve in a community theater setting. Choosing to present “Hamlet” in repertory with “Rosencrantz and Guildenstern Are Dead” is a stroke of genius.

We all know the general lines of “Hamlet,” and can sort of recognize all those references to the dark Dane in Tom Stoppard's cleverly playful “Rosencrantz and Guildenstern.” But having the chance to see these two works side by side brightens both. 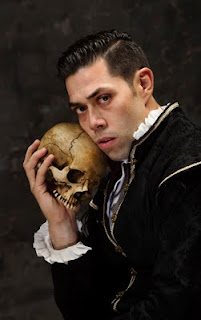 Of course you must see them both, and if possible, see “Hamlet” first. Having that memory of Matthew Bowdren's intensely brooding performance in the title role will give a little heft to the funny non sequiturs of R (Patty Gallagher) dressed in bright blue and G (Ryan Parker Knox) in brighter orange.

Comedians are never appreciated enough for the difficulty of what they do. This experience will help. Gallagher and Parker Knox make Stoppard's brainy foolishness shine in the presence of Shakespeare's pondering prose.

Cynthia Meier has taken the reins as director of both plays, which must be about like what it takes to drive the Budweiser harnessed team of Clydesdale draft horses.

Some sweeteners of note are particularly important to her presentation of “Hamlet.” A music score composed by Jake Sorgen subtly adds imagery to The Rogue's traditional bare stage approach.

In the program Sorgen notes the beginning point for his work was found in Ophelia's feelings of being trapped and manipulated. Hamlet has similar feelings but acts them out more vigorously. Sorgen responds in kind.

The haunted mood of Elsinore castle is emphasized in a trio of floor-to-ceiling tapestries of black and faded gold fantastically providing ancient legitimacy with a chilling realism. Scenic artist Amy Novelli as directed by Joseph McGrath created them and must be congratulated.

Within this setting so simple on stage but filled with complex intention, Bowdren draws out a noble personality of compelling presence. Determined to seek revenge though he has little power to draw upon, Hamlet plays out an intriguing game of hidden moves and machinations.

A part of Hamlet's strategy is to sidetrack and eliminate his former pals Rosencrantz and Guildenstern, stooges of a sort originally sent by the king (Hamlet's stepfather) to report on Hamlet's erratic behavior.

In addition, David Morden plays Polonius so well the blustering figure becomes a refreshing presence who is missed soon as he is (literally) dragged off stage following his accidental death.

The conceit of “R&G” is that it contains several of the famous scenes from “Hamlet,” which are worked into the backstory of bewildered Rosencrantz and Guildenstern. These scenes are performed in “R&G” by the same actors wearing the same costumes they wore in “Hamlet.” The impact is tremendous.

The total effect of this double-header in repertory is an artistically deep and satisfying experience. Meier says both plays offer worthy moments of contemplation on the finality of death, but also on the release that death provides.

That is true, certainly, but The Rogue is also giving us a few hours of opportunity to take in the power that is uniquely theatrical to light up corners of our lives and minds with insights far beyond today's movies and television. ART this is, spelled with capital letters.

Shakespeare's “Hamlet” runs in complementary schedules with Tom Stoppard's “Rosencrantz and Guildenstern Are Dead” at The Rogue Theatre, 300 E. University Blvd., through Nov. 22 with performances at 7:30 p.m. Thursdays through Saturdays, 2 p.m. Sundays. For specific times, check

Tickets are $35, with discounts available. For details and reservations, 520-551-2053, or visit www.theroguetheatre.org

Posted by TucsonStage.com at 6:30 AM