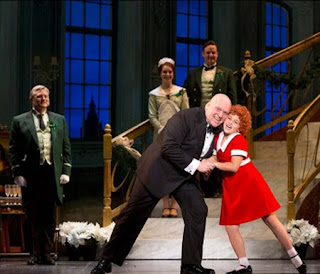 Daddy Warbucks and Annie in the grand finale of "Annie" in Centennial Hall.

Totally bullet-proof and wholesomely entertaining, the nationally touring production of “Annie” that Broadway in Tucson brings to Centennial Hall hits all the marks and contains all the hits.

You'll be singing 'Tomorrow” on the way out of the theater, for sure, along with “It's the Hard Knock Life” and “Easy Street.” As played by Issie Swickle, red-haired Annie is spunky, defiant, determined and all those other words that today's feminist moms want their daughters to personify.

Much has been made in the theater press that this national tour is a lower budget, non-Equity production. Trust me on this, “Annie” still looks first rate, with strong voices in all the roles.

As promised, Martin Charnin the director (who staged the original Broadway production in 1977) gives the same sweet-faced innocence to this year's Annie. She is power-packed with that traditional Tom Sawyer-ish quality we used to call “gumption.” The stuff that built this nation and made it great in the first place.

Instead of a cast featuring some sparkling X-factor actor with a larger than life stage presence, “Annie” provides solid balance among all the principle players. Their all-for-one and one-for-all ensemble attitude gathers momentum until, by the time Annie is standing on top of the President's desk in the Oval Office singing “Tomorrow,” you will be ready to storm the stage and sing along.

Avoiding caricature as the heartless orphanage boss Miss Hannigan, Lynn Andrews still gets her laughs. Sympathy demands she be unsympathetic to the seven girls in her command, but she also keeps it interesting by making us wonder exactly what she will do next.

Oliver Warbucks, the self-obsessed tycoon with the shiny-pate played by Gilgamesh Taggett, is believably hard-nosed in the beginning. Then equally believable in the second act as he warms to Annie and...as we know...becomes Daddy Warbucks (just like in the funny papers).

Not to be forgotten are the six little orphan pals of Annie who play the chorus and become so endearing that by the time for their big chorus line number, the audience on opening night broke out in spontaneous applause.

The story of Depression Era problems, unemployment and government programs such as the New Deal are still in the script, but receive only passing recognition. What we get and what we want is the irrepressible Annie.

There is also a spotlight role, just like in 1977, for Annie's ragamuffin dog with a loyal heart, Sandy.

Tickets are $29-$65. For details and reservations, broadwayintucson.com

Posted by TucsonStage.com at 8:40 AM