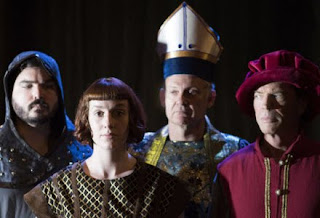 Lucille Petty, front, and back row from left, Steve  Wood, David Johnston and Clark Ray as the inquisitors.

Was Joan of Arc one of the world's first feminists? A prototype from the middle ages who shaped the difficulties women would face centuries later trying to emerge from the shadows of men?

With Christian values in America presently at their lowest ebb since the present day Cultural Revolution began, and feminist values kept at the top of today's TV news programming by one confrontation or another, it is easy enough to look back through centuries of history and measure their actions against our contemporary values.

So Toni Press-Coffman and the Winding Road Theater Ensemble have taken a fresh look at George Bernard Shaw's play “Saint Joan,” first performed in 1923 on Broadway.

Thanks to the instant insight of Wikipedia, we get a sense of Shaw's intention – to depict Joan as an intuitive, unschooled genius determined to place God above the established “rights” of kings, their armies and governments.

This is pretty heady stuff. So Press-Coffman set out to adapt Shaw's play for today's audiences who might find the playwright's dialogue more crunchy then what they are used to in their regular entertainment.

And Press-Coffman wanted to give a little boost to Shaw's well-established feminist sympathies, as well as his biting humor.

However, these insights were difficult to discern on the play's opening night, even though the production has been crafted by veteran director Susan Arnold, and Tucson's highly regarded Lucille Petty has the title role.

There is no shortage of strong performances among the six cast members, most of them handling multiple roles. But the dialogue is complex, the labyrinthine logic pursued by Joan's accusers is so...labyrinthine.

To become engaged in the machinations that constantly swirl around Joan right from the time, at age 17, when she demands her own militia to defeat the English army on French soil does require far more than casual listening.

She must contend with several strong-willed authorities in government making elaborate charges against her. Joan's motivation in 1429 is to purify France by driving out the English occupiers. She believes this is God's intention.

Joan's insistence that her devotion outranks the authority of the Church's own leaders eventually gets her in trouble with both the king and the Church. This leads to lots of lofty theoretical dodging about, reminiscent to me of the politically driven debates high authorities must have called on centuries earlier to decide how many angels can dance on the head of a pin.

As theater, the drama also becomes rather dodgy. Mostly it is a bunch of guys shouting at each other while Joan responds by refusing to be intimidated.

In the end, “Saint Joan” becomes one of those productions you appreciate, rather than enjoy.

Posted by TucsonStage.com at 11:52 PM