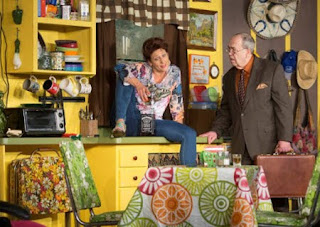 Maude (Susan Kovitz) will try anything to get Lionel (Roberto Guajardo) to say her thrift store find is an original Jackson Pollock.

Life is about hope, the magical ingredient that can make anything seem possible. But if that doesn't work, life can also be about getting down and dirty. Survival, after all, is the bottom line.

At the center is a painting by modern art's splatter master, Jackson Pollock, whose abstract paintings can closely resemble a house painter's drop cloth and have inspired may ingenious descriptions.

Kovitz plays Maude. She has lived in rough-around-the-edges trailer parks her whole adult life. One day as a joke on a friend, she went to a second-hand shop and bought the ugliest picture she ever saw. Cost her $3.

A couple of days later the young fellow who teaches art at the high school told her “That painting looks like a Jackson Pollock.”

Up to that point, Maude didn't know Jackson Pollock from Irving Peacock.

But she know the internet and pretty soon she knew all about Jackson Pollock. And with each new fact, she became more convinced her painting was a genuine Jackson Pollock, too.

Hey, it could happen. Who among us hasn't wandered through a Good Will store and felt sure it must contain some lost treasures.

Maude is so convinced, she convinces a world class art critic to verify the painting's authenticity by visiting her trailer – modest on the outside but filled with every kind of forgotten tchotchke from the past 75 years of pop culture.

Remember those Bum Steer bars from the 1970s? Like that.

Which is exactly where “Bakersfield Mist” begins.

A somewhat effete Lionel (Guajardo), conspicuously dressed in a suit and tie, looks and feels misplaced as an outer space alien when he knocks on Maude's door and dogs start barking. But Maude looks at him and sees a meal ticket.

All Lionel has to do is say her painting is a Jackson Pollock, and she is set for life. It doesn't matter (to Maude) if it is actually a Jackson Pollock or not. That only matters to Lionel. His meal ticket is his spotless reputation.

The heart of “Bakersfield Mist” is watching Maude dance around Lionel's sophisticated mannerisms, sizing him up. Not worried that she can't match his superior intellect because she knows under his over-stuffed shirt there beats a heart just like all the other guys she has ever known.

Lionel, at the same time, knows his survival and escape from the clutches of these trailer people depends on keeping the upper hand.

Kovitz and Guarjardo are two of Tucson's most respected stage talents. They fill these characters with the kind of intensity that knows how to survive. Please note, too, that some of the language gets rather rough. There is no lack for the F-word.

Tickets are $30, with discounts available. For details and reservations, 882-9721, or visit invisibletheatre.com

Posted by TucsonStage.com at 8:08 AM