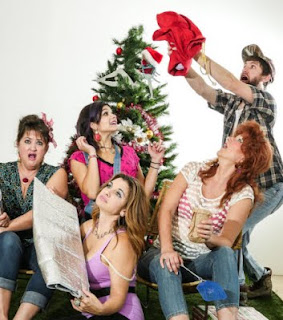 Balancing out that sentimental spirit bubbling through the Baked Apple this red holly berry season comes the highly anticipated “Great American Trailer Park Christmas Musical,” a 14-song celebration of tacky lifestyles and unseemly language that Arizona Onstage Productions has unleashed in the Cabaret Space at the Temple of Music and Art, 330 S. Scott Ave.

Played at a flying reindeer pace under Debbie Runge's direction, you're never more than a moment away from the next ridiculous mash-up of traditional yuletide greetings and angry responses to America's most loved religious and secular holiday.

If you hate fighting those rabid shoppers, always hearing the same half-dozen songs and never finding a seat at Starbucks, this show is your antidote, your Christmas gift, your cork-popper for a shrinking heart.

The true spirit of mistletoe magic at the make-believe Armadillo Acres for hand-me-down mobile home living in north Florida's poverty-prone panhandle is convincingly expressed with blue collar gusto by the show's six-member cast, who close the first act singing “F—k It, It's Christmas!”

This is not a show for the sensitive soul. It is rated R and has more bad language than a South Park holiday special on TV.

Santa Claus is shown no respect, and at least one character insists Santa doesn't even exist. We are in the land of plastic baby Jesus and those equally iconic pink flamingos. Just like that country song says, if it wasn't for bad taste the folks in this trailer park wouldn't have any taste at all.

The venerable and much-loved Liz Cracchiolo has a white-knuckled grip on the central role of Darlene, the irascible resident who hates everything. But then she gets jolted by a surge of electricity while trying to unplug the extension cord a sneaky neighbor has stuck in her trailer's power outlet.

Lin's name is actually her nickname – short for Lineoleum, a reminder of the kitchen floor on which she was born. There's lots of incidental info like that in the script, which often feels rushed because actors are so determined to keep this a high-speed production.

Representing the male side of our homey little circle are Rufus the handyman (Jeremy Vega) who also plays Santa Clause every year at the nearby 99 cent store and Jackie Boudreaux (Steve McKee) the oily entrepreneur who runs a pancake restaurant with Hooters-type waitresses.

The Hooters pancake house actually sounds like a pretty good idea for retirement communities, and calls to mind those topless donut shops that have been a Florida mainstay for many years.

But reality has very little to do with “The Great American Trailer Park Musical,” as you might well imagine. All the cast members stress the good-hearted nature of their individual characters, as well as that indomitable American spirit of being able to overcome any obstacle – whether it is rabid shoppers, a narrow play list of Christmas songs or never finding a seat at Starbucks.

Tickets are $32.50. Several performances are reported close to being sold out. For details and reservations, arizonaonstage.org

Posted by TucsonStage.com at 7:08 AM