CRUNCH TIME FOR "EVERY CHRISTMAS STORY..." 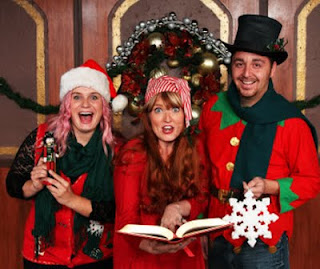 About the time you start thinking most of the Christmas jingles you hear are not coming from Santa's sleigh bells but from the disappearing coins in your pocket, that's the time to head for Live Theater Workshop and its holly jolly production with extra berries on top, “Every Christmas Story Ever Told (and Then Some).”

This secular comedy smash-up directed byMissie Scheffman takes one hundred years of sentimental moments from this best-loved season of treacly treats (especially since the early days of television) and turns them into zippy mincemeat farce (think the Grinch getting a pie in his face). And that's just the first act.

Once the audience has been properly indoctrinated to the possibilities in this blenderized version of commercial Christmas fare, the cast's trio of energized actors comes roaring back out to deliver the most brilliant postmodern re-interpretation of Charles Dickens' “A Christmas Carol” that I've ever seen.

Samantha Cormier commands the stage with a withering impression of curmudgeonly old Scrooge, hunched over with greed and perpetually seething in his desire to keep every penny he has while drooling to acquire still more.

If the playwrights (Michael Carleton, James FitzGerald and John K. Alverez) had asked her, Cormier could have thrown in a little Phantom of the Opera as well as some Jekyll and Hyde.

Playing opposite this focused force of centered selfishness is Cyndi LaFrese in a variety of skit roles ranging from Jacob Marley and the Ghost of Christmas Future to the haloed angel Clarence hoping to earn his wings in “It's A Wonderful Life.”

Albert Riesgo completes this story-telling team, generally setting up the scenes and serving as the straight man who keeps the production well-paced and holding steady.

While a re-cap of Act One is pretty much impossible because there are so many specific references in a blizzard of swirling non sequiturs, here's the general gist of it.

The stage set is dressed like it is ready for one of those all-purpose Christmas television specials, with a brightly colored tree in the corner and stockings hanging on the hearth.

Cyndi (LaFrese) shouts “Lets get ready to jingle!” and the show is on. Please note, there is some audience participation in the first half. You've been warned.

There are descriptions of curious Christmas traditions from other countries, a long bit mixing the Who family of Grinch fame and a famous baseball routine by Abbot and Costello, a note that Rudolph the Red-Nosed Reindeer was created by an ad agency in 1939 and a plethora of other passing pop culture references – including the odd origins of St. Nicholas in the year 241 and the warning “When you stop believing in Santa, that's when you starting getting clothes for Christmas.”

Creating this merry mayhem is LaFrese's time to shine like that tree-topping twinkly star. Her non-stop energy is everywhere, filling every corner of the stage.

If you are one of those people who starts feeling burned out on Christmas music before it gets to be Dec. 1, you may need to see the LTW show twice, at least.

"Every Christmas Story Every Told (And Then Some)” runs through Dec. 27, with performances at 7:30 p.m. Thursdays, Fridays and Saturdays, 3 p.m. Sundays, at Live Theatre Workshop, 5317 E. Speedway Blvd. Tickets are $20, with discounts available. For details and reservations 327-4242, or visit livetheatreworkshop@gmail.com

Posted by TucsonStage.com at 4:32 AM