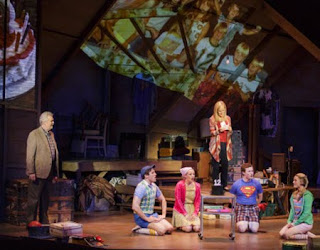 The lives of Dan and Sue are portrayed by six actors over several decades in "Snapshots."

"Snapshots,” the buoyant Christmas show by Arizona Theatre Company, isn't actually about Christmas. But it is a family musical filled with sentimental moments – which makes it the perfect ATC show for this sentimental season.

All the music and lyrics are by Stephen Schwartz. If that name looks somewhat familiar, he wrote the songs for Broadway hits “Pippen” and “Godspell,” and more recently “Wicked.” But he became best-known as a favorite tunesmith for Disney. His award winning film scores include “Pocahontas,” “The Hunchback of Notre Dame” and “The Prince of Egypt.”

Credit David Stern for coming up with the idea for “Snapshots,” and pulling together a show drawing all of its songs from Schwartz's rich catalog of compositions. Some of the lyrics were changed a bit to fit the show's story line, but the melodies remain the same.

Stern chose 28 songs to tell a two-act tale of modern life that feels as timeless as Christmas itself. There are only two characters, Dan and Sue, each played by three different actors at different stages of their lives.

The arc of the musical is the life of Sue and Dan. From becoming friends at age 12 to going through high school, college, marriage, career, children, more career and then...nothing...as their empty-nest life together leaves Sue feeling...empty.

Which is exactly where “Snapshots” begins, with Sue up in the attic, her packed suitcase at hand, writing a goodbye letter to Dan when he unexpectedly comes home early from work and discovers her about to leave.

She gives him the letter, he reads it, is heartbroken and they begin to rummage through their lifetime of memories stirred by the many mementos that have been stored away and forgotten there.

Time flows in both directions as we watch Sue and Dan grow and change, re-experiencing all the doubts and triumphs that go along with being a teen and then a 20-something. Their marriage is equally fraught with more indecisions and occasional triumphs.

Often all six performers are onstage together. Sometimes their older selves give advice to their younger selves. And sometimes it is the enthusiastic younger versions who step in to remind their discouraged older selves of the joys they have forgotten.

Though there are only two characters to portray, the sextet of actors create an ensemble effort that is easy to follow through the song lyrics and set pieces that describe these milepost scenes so familiar to each of us. Yet the emotions still feel fresh. It is reassuring to see Sue and Dan ride the same roller coaster we all know so well.

What we get at the end is a lifetime sense of perspective, an ability to realize in real terms that maybe love really is all we need.

No matter your age, there will be moments of truth to be savored here. Whether your date at the theater might become your mate one day, or whether there is a personal poignancy for you in the quiet house of Dan and Sue with the richness of their life tucked out of sight in the attic, this is the gift of “Snapshots.”

The show runs through Dec. 19 with performances at various times Tuesdays through Sundays in the Temple of Music and Art, 330 S. Scott Ave.

Posted by TucsonStage.com at 2:58 AM