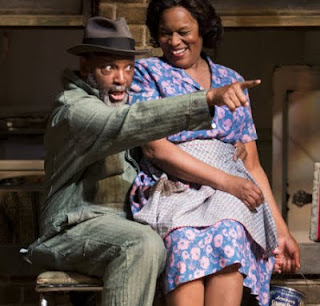 If you love the plays of August Wilson, particularly “Fences” set in 1957, you must see Arizona Theatre Company's new production directed by Lou Bellamy.

High intensity is maintained through the play's full 150 minutes of conflicts and frustrations in the life of middle-aged Troy Maxson (David Alan Andersen), a promising baseball player in the Negro Leagues but well past his prime by the time major league baseball began to integrate in 1947.

As a theater experience this “Fences” is richly rewarding, with the ensemble cast of equally talented actors as focused as a professional ball team to portray the tragedy that is Troy Maxson's life. Anger nourishes this man and Andersen never lets us forget it.

Yet the play's most powerful moment belongs to Kim Staunton as Rose, Troy's determined wife of 18 years. She runs the household and tries to keep Troy from breaking the spirit of their teen son Cory (Edgar Sanchez).

Cory has the talent to be a good high school football player, good enough maybe to win a college scholarship. But Troy refuses to let Cory play, convinced the white people in charge of everything won't give Cory a fair shake.

Just like they didn't give Troy a fair shake when he was a ball player. His hurt and his anger have built a fence between father and son, though Troy does feel a family responsibility to Cory, Rose and Troy's older son from an earlier marriage, Lyons (James T. Alfred), who longs for the life of a jazz musician.

But Troy's sense of responsibility, which could be seen as a good thing, becomes a bad thing because it only increases his anger and unreasonableness in dealing with family matters.

Adding another layer of tension is Troy's pal from prison and now his workmate as a sanitation worker for the city, the better-natured Bono (Marcus Naylor). A bit of mystery and sadness is provided by Terry Bellamy as Troy's addled brother Gabriel, suggesting angelic connections with a bugle hung on a rope around his neck.

All of Wilson's plays come with sizable baggage in the playwright's fulfilled intention to write a play for each decade of the 20thcentury, examining the unsettled relationship between African-Americans and European-Americans over that 100-year-span.

Cultural changes since the 1960s have been so accelerated, “Fences” now feels more like a period piece. Wilson has been quoted that he wrote the plays to give white people a better understanding of what the black person's life was actually like. ATC's predominantly white audiences will get that.

“Fences” continues through Feb.6, with performances at various times Tuesdays through Sundays in the Temple of Music and Art, 330 S. Scott Ave. Tickets are $23-$63. For details and reservations, 520-622-2823, or visit arizonatheatre.org

Posted by TucsonStage.com at 8:51 AM