"BY THE BOG OF CATS" BOTH CHILLING AND WRENCHING

"BY THE BOG OF CATS" BOTH CHILLING AND WRENCHING 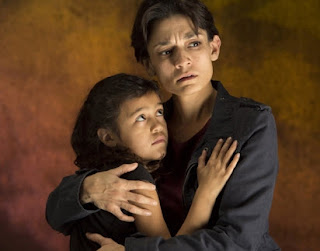 The Rogue Theatre's deeply layered and emotionally charged production of  “By the Bog of Cats,” taking its inspiration from the Medea mythology, is a gut wringer.

Marisa Garcia's performance as the doomed and yet determined Hester Swane sets a new standard in local theater for pouring out all of one's talent to the audience. She creates a character consumed by anger and so despised by her provincial neighbors that she can do no right. By curtain call Garcia is completely drained.

Yet Hester's daughter Josie, so fetchingly played by Garcia's own goddaughter Larisa Cota, loves Hester and with the eyes of a child sees only her mother's goodness. When manic-depressive Hester gets angry with seven-year-old Josie and then asks for forgiveness, the helpless child answers “I know you didn't mean it.”

Such moments will tear your heart out. For we know Hester is a bad person through and through, but she does have some good reasons to be so angry. It is her own fragile personality that fails her.

The Bog of Cats is a miserable place, a grossly unpleasant and better left forgotten bit of Ireland feeding on its own unhappiness.

We in the audience know this though we never actually see it on stage. Instead, the actors and director Joseph McGrath boost our imaginations into convincing believability with their actions and the rich words of Irish playwright Marina Carr.

The Rogue stage is bare and brown, constructed on several levels to represent whatever the story requires. The costumes are detailed, and say much about the characters.

"By the Bog of Cats” begins with Hester returning to this fetid land dragging along a dead black swan, a pet which she has come to bury. No one but Josie is happy to see Hester back here.

As foreboding as the bog itself is the imposing figure of the eccentric and blind Catwoman, wearing a pelt of skinned cats, eating mice and lapping her wine from a saucer – just like a cat.

Though the role is relatively small, Cynthia Meier gives the Catwoman a powerful presence, making her the spiritual center of this miserable community so desperately connected to powerful forces both dire and doleful.

Carr counterbalances this intensity with a dark humor she spreads among several of the villagers. There is Father Willow (Roger Owen), the sad-eyed priest, who is so fascinated by the Catwoman – just as you would expect good to be fascinated by evil.

Putting on airs, even in the Bog of Cats, is Mrs. Kilbride (Patty Gallagher), mother of the weak-spined Carthage Kilbride (Ryan Parker Knox), unmarried father of Josie, seduced by the immoral Hester when Carthage was just a teen.

The play runs 2 1/2-hours with a cast of 12 to tell this tale of warning. Even the small roles are performed with depth and caring to provide a fine canvas on which Hester smears her life.

Posted by TucsonStage.com at 10:40 PM