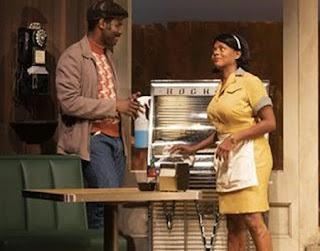 Sterling (Cedric Mays) hopes his charm will count for more than his past when he sees Risa (Erika LaVonn).

Swimming around in the colorful Pittsburgh dialect of August Wilson's “Two Trains Running,” produced by Arizona Theatre Company at the Temple of Music and Art, is the metaphor that Wilson's pair of trains are life and death.

Many metaphors and other thoughtful moments are found in the three-hours-plus of this historical drama set in a worn-out diner that has outlived its place in the city's Hill District in 1969.

Historically, the Sixties were a decade filled with violent civil rights demonstrations and the history-changing assassinations of iconic leaders, both black and white.

Yet Wilson, in his dedication to writing a play representing each decade of the 20th century for African-Americans, chose to depict the 1960s with this little community of six men and a waitress – sitting around waiting.

The playwright said he wanted to remind everyone that despite all the advances made by African Americans in the decade, not much had actually changed for most of the everyday people who were  just trying to get along.

Lou Bellamy directed ATC's excellent production. Bellamy's theater company has produced more of Wilson's plays than any other theater in the world. ATC delivers one of the most finely balanced performances that Wilson's work has received here.

Every cast member gets a couple of spotlight scenes and virtually every scene bristles with the frustration of waiting. Picking a favorite character will depend on your own experiences in life so far.

The audience's sentimental favorite is Hambone (Ahanti Young), a mentally challenged but determined guy who refuses to forget that 10 years earlier a German butcher in the neighborhood had cheated him out of a large ham that was to be his payment for painting a fence.

Looking after Hambone and being his defender is Risa (Erika LaVonn), the diner waitress. Still young enough to be attractive, but worn down by her life at the outer edge of poverty, Risa uses cynicism as her defense. Determined to meet trouble on her own terms, she still isn't expecting to get much in return.

Within the social structure provided by those five other men, Memphis (James Craven) is the restaurant owner and central figure. He represents the hard-working, no-nonsense attitude of paying his bills on time and making an honest living.

This has given him a hard edge. Being charming is not high on his list of things to do. Neither are the demands of Black Power and all those other activist movements that keep everyone stirred up.

The main plot point is that Memphis is determined not to let the city take his store for less than $25,000. The city, in its methodical plan to renovate the area block by block, says it will only pay $15,000 (which is twice what Memphis paid for the building originally).

The wealthiest and best groomed is Mr. West, who owns and operates the funeral home just across the street. Culturally he sees himself as higher up the business ladder than Memphis.

Holloway (Alan Bomar Jones) is the most loyal customer and iconic figure, always taking the same seat at the same table. His observations give this little restaurant and its neighborhood a sense of place and importance.

Wolf (Lester Purrry) is the traditional corner-cutter, always looking for a quicker way to make the same amount of money. He runs the local numbers racket. He sees his importance in the community as giving people some reason to hope. And if somebody gets lucky, hits on a number, a reason to feel good about themselves.

Standing for the future is the youngest and most turbulent male, Sterling (Cedric Mays). Already burdened with a prison record for attempting to rob a bank, Sterling feels the constant pressure to make something of himself.

But nobody will hire a bank robber.He doesn't have a family, either, and he doesn't really belong any where.  He's convinced that everybody around him has more money and is going more places.

August Wilson has shaped his play like a symphony conductor, calling on each section of the orchestra to provide a different mood, a contrasting rhythm, to create a sound poem of emotions that can't get out.

In the end, what we receive is an appreciation for the complexity of life in the Hill District of Pittsburgh in 1969. Is it likely anything has changed much in the last 50 years since 1969? That doesn't seem likely, either.

"Two Trains Running" plays through Feb. 9 with performances at various times Tuesdays through Sundays in the Temple of Music and Art, 330 S. Scott Ave. Tickets are $25-$66. For details and reservations, 622-2823, or visit arizonatheatre.org

Posted by TucsonStage.com at 6:28 AM