"STUPID F***ING BIRD" HAS FUN SATIRIZING AND DECONSTRUCTING "THE SEAGULL" 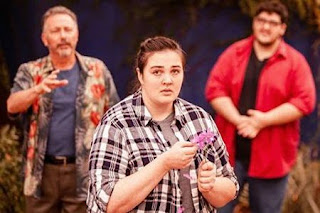 Opening this weekend is the satirical head-spinner, "Stupid F***ing Bird," Aaron Posner's take on what can happen when you run Chekhov's "The Seagull" through a high-speed food processor designed by a clever college student who failed his course in East European literature.

Ardent fans of Chekhov might not appreciate this free-form filet of Russian soul, but no experience is necessary in knowing any of Chekhov's plot lines. The bottom line: "Stupid F***ing Bird" is fun, in a good way.

The play isn't really about Russian angst anyway. It is more about the angst of our own American actors and playwrights trying to find their way to fame in a culture that prizes celebrity without depth.

This is one of  those shows where anything can happen, and probably will. Whether or not you want to think at all, this 2 1/2-hour production will have you thinking -- about the nature of nature, the nature of reality and also the need for reality in a media-obsessed society that keeps asking "why can't I just believe what I want to believe?".

Even with that long running time, the hours zip by quickly, right from the opening scene when two actors can't stop arguing who is the most sad and miserable.

Without doubt, we are watching a Russian comedy at its most Chekhovian. Quickly it becomes clear we are at a rural dacha unlike any other.

Just briefly, "Bird" takes place in more modern times with some passing references to modern technology and pop culture. Just like "Seagull," the plot includes a play-within-a-play, a famous Moscow actress, a frustrated playwright, a young starlet eager to trade sex for success and -- of course -- a stage littered with broken hearts because everybody loves somebody else.

The plot also has actors talking directly to members of the audience, actors admitting they know they are on stage acting, and one woman playing a role that is traditionally played by a man.

That would be Samantha Severson playing Con, the frustrated playwright eager to suffer for his art. Nicely enough, Severson gives the role power and believability.

While there isn't a plot with a recognizable through-line, per se, there is a point: that creating all art is painful and seldom completely successful. Yet, the painful act of creating art is equally seductive and irresistible.

Every scene has lots of moving parts, which this cast presents with admirable ensemble effort. And finally, flaunting its hipster insider-ness, please note there is ample use of the F-word, just like the show's title implies.

Tickets are $28, with discounts available. For details and reservations, 401-3626, or visit windingroadtheater.org

Posted by TucsonStage.com at 6:29 AM