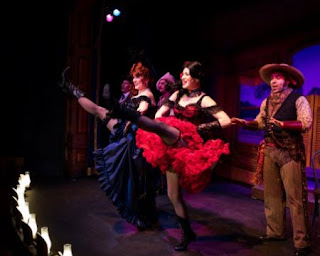 At the Gaslight Theatre, dancing girls and cowboys remind us how the west was won.

Gaslight Theatre goes back to its roots for a fresh look at "The Belle of Tombstone." Echoes of traditional Old West "mellerdrama" fills the eastside hall, with many of the songs feeling like originals written with the twang of wide open spaces.

This time around, Heather Stricker rules the roost as strong-willed Belle, owner of the Silver Dollar Saloon in red hot Tombstone, a new town in the Arizona Territory, sizzling with opportunity -- especially for anyone lucky enough to strike it rich at one of the many mining claims in them thar hills,

On hand to ruin everybody's day is dapper Jack Diamond (Mike Yarema), an unusually lucky gambler and the only man in town who owns a three  piece suit. One of Jack's most reliable income streams is the claim he has to a silver mine.

Jack keeps selling the claim to suckers, and then buying it back for next to nothing when the sucker  never finds any silver. Unfortunately, Belle's hapless bartender Frank (Jacob Brown) is the latest dreamer to buy that claim. Belle is furious but Frank is convinced he will be wealthy soon.

Coming onstage for his share of the action is the eponymously named Johnny Ringo (Todd Thompson), Arizona's dastardly Man in Black famous for wearing that big iron on his hip. When Johnny teams up with Jack everyone else in Tombstone is defenseless.

That's when we meet the ebullient lawman Ned Wingate (Jake Chapman), a masterful optimist who aims to clean up crime and give Tombstone a future.

Eager to add their own brand of beauty to the scene are Patsy the Prairie Nightingale (Erin Thompson) and bright-eyed Margarita (Janee Page), a showgirl who can't resist being drawn to the wrong side of the tracks.

There's a who lot of singing and jawing before all this gets worked out, also a runaway stage coach, a dynamite accident in the mine shaft and the set-up for one of Gaslight's most famous jokes -- the one about hearing about a herd of cattle ("Sure, I've heard of cattle.")

After 40 years of sold-out shows, some of Gaslight's jokes are as famous as its actors. This is also the show that asks the question: "What do you  get when you throw a piano down a mine shaft?"

In keeping with the times, this cast used to living in those wide open spaces returns with its Grand Ol' Opry Olio. Included in the song list are tributes to Hank Williams, Patsy Cline, Minnie Pearl and Porter Wagoner.

Charlie Hall was a cut above the rest, singing a medley of Freddy Fender favorites, "Til the Next Teardrop Falls," "Wasted Days" and "Que Paso."

But my personal favorite was Grandpa's Jug Band with players on a jug, a set of spoons, a washboard, a washtub bass and a guitar.

"The Belle of Tombstone" continues through March 31 with performances at various times Tuesdays through Sundays in the Gaslight Theatre, 7010 E. Broadway Blvd. Tickets (plus tax) are $22.95 adults; $20.95 students, seniors, military; $12.95 children age 2-12. For details and reservations, 520-886-9428, or visit www.thegaslighttheatre.com

Posted by TucsonStage.com at 1:05 PM