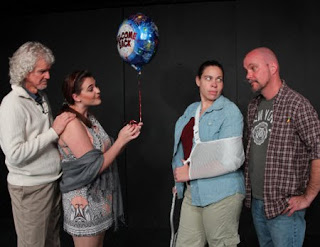 Live Theatre Workshop goes for the gold with an intense and insightful production of "Time Stands Still" by Donald Margulies. While LTW may be best known for its high-energy comedies, this show is not one of those.

Set against the endless wars across the Middle East, which some American publications feel compelled to cover, playwright Margulies dives deep into exploring questions of whether this violent coverage is essential to an informed society or whether it has become just more entertainment for mass market magazines.

Also cast are Glen Coffman as Richard the photo editor of an unnamed, though elite, magazine and Emily Gates as his young wife Mandy, whose "simple" interests represent the general public.

Preston's energy drives this production. She plays Sarah, a hard-nosed combat photographer so dedicated to military conflict it wouldn't surprise anyone if she designed her kitchen in a camouflage pattern, because military outposts are where she feels most comfortable.

Matching her torque-jawed attitude with his own determination to survive any battle is Younggren as James, an equally dedicated war correspondent. But he is beginning to suspect there might be more to life than the challenge of surviving these conflicts.

"Time Stands Still" is set in their New York City apartment, which always feels tossed about because each of them is forever dashing off on some suddenly critical assignment.

But this time Sarah has arrived back home badly injured by a roadside bomb that almost turned her into a newspaper obituary. James feels somewhat responsible, prompting his suspicion that maybe the two of them won't be lucky forever.

James is also a movie buff, seeing 1950s science fiction flicks as metaphors for civilian fears fed by the Cold War. He has lots of theories about the crossroads of entertainment and politics.

Some of these theories are shared with Richard, a longtime friend who is helping shepherd a freelance story James wrote, trying to get it into the magazine where Richard works.

The  heart of Margulies' play centers on the discussions these three have. Sarah is a true believer giving extreme value to her pictures of civilian suffering that she risks her life daily to shoot and send back to the States. These are photos of refugee horrors that must be seen.

James has a somewhat more theoretical view, recognizing that her pictures and his stories won't get published unless the magazine editors believe the readers are interested.

Richard, who wears clean clothes to work in an air conditioned New York office every day, knows the gritty stories of his two friends are competing for magazine space with glamour tales of  Hollywood celebrities, hot fashions and the latest new digital devices.

Mandy the innocent one throws everybody's opinions into a tossed hat when she asks why Sarah and James don't drop their cameras and note pads, stop being reporters, and instead do something to actually help the people who are  dying right before their eyes.

Is this coverage important to Americans living comfortable lives -- to justifying the world's most expensive military forces -- or just important to the nameless refugees and victims of selfish violence in lands where this forever war has become a numbing Hell.

And what about the war correspondents? Do they owe any responsibility to the people dying all around? Should they be helping the wounded on both sides --- or are they supposed to stay neutral, like referees in a violent football game?

All four friends have a different answer. All four actors deliver their thoughts with intense conviction. Can they all be right?

Margulies doesn't pick sides, either. Just like it says on Fox News: "We report, you decide."

Posted by TucsonStage.com at 12:57 PM