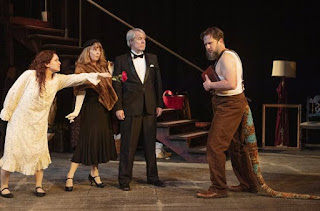 As enchanting as it is delicious, “The Secret in the Wings” directed by Cynthia Meier at the Rogue Theatre seeks to restore nothing less than the fanciful innocence of childhood.

A time that ends right around the age you start to wonder “What if Santa Clause isn't real?” That's when time waves you a cheery good-bye and the next thing you know, the question is “What happened to my life?”

Where did the child go that loved to see faces in the clouds and always greeted each morning as the beginning of a new adventure. His dreams weren't interrupted by TV commercials and magic wasn't defined by digital screens with buttons to push.

The magic was real and the darkness was dangerous. Playwright Mary Zimmerman remembers those times: when a princess was the most important person in the whole world and noisy boys could turn into broad-winged swans who flew away to far-off lands.

Meier remembers, too. With a cast of four women and five men she turns the Rogue stage into a wonderland of dark colors and mysterious shadows, telling starchy stories filled with rock-ribbed warnings about always telling the truth and keeping your promises.

Thanks to the financial success and marketing genius of the Disney corporation fairy tales have been completely emasculated over the past 70 years. Before that, fairy tales were harsh lessons packed with violence, a valued way for kids to be scared straight. Meier has an appetite for those times and wants to give us more than a taste.

In true ensemble fashion all the cast members except Matt Walley play several roles, ranging from kings and queens to plotting housemaids and duplicitous masters.

As the play is constructed, a framework is made from “The Beauty and the Beast,” set in more modern times. The Beast (Walley) has become the frightening neighbor next door babysitting a young girl who is convinced he is an Ogre.

But this beast, though he looks fearsome with his full beard and a long tail, brings his book of fairy tales. As he begins reading, each story is acted out.

The first story is about three young Queens exiled to a desolate island, where they pluck out their own eyes then eat their own babies after they ran out of food. Right away you know this isn't the land of Disney.

Rogue regulars will note this production uses an actual stage set and many props. The stage itself is massive. The set includes an ornate closet that looks menacing even with the door closed, together with a towering staircase that seems even more menacing.

A quartet of ominous floor lamps and several assorted chairs, some draped with clothing, are scattered about. Everything looks monochromatically dark and threatening. Not like a haunted house exactly but more “normal,” which makes the total effect even more threatening.

In the program notes, Meier explains that seven fairy tales taken from European lore have been selected. All of them are entwined, each interrupted at a dramatic point so another can begin. There is no intermission as the drama builds and anything could happen.

With such titles as “The Wild Swans” and “Stolen Pennies,” each of these lessons in the importance of morality stated as a powerful metaphor becomes to adult minds a reminder of their own lost innocence, a bittersweet trampling of eager wonder and nostalgia for the time when those stories could seem so real.

But not to worry, this awareness becomes its own reward. It is never too late to do the right thing...and by the end we are assured every dark winter is followed by the rebirth of Spring.

“The Secret in the Wings” runs through March 17 with performances at 7:30 p.m. Thursdays-Saturdays, 2 p.m. Saturdays and Sundays, at the Rogue Theatre, 300 E. University Blvd. Tickets are $38. Student rush tickets, $15 when available, go on sale 15 minutes before curtain. For details and reservations, 551-2053, or visit theroguetheatre.org

Posted by TucsonStage.com at 4:37 PM