PARTY ON WITH THE SOARING "AMERICAN MARIACHI" 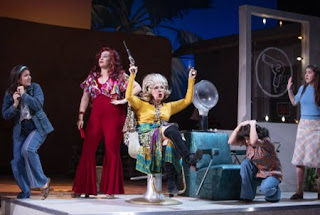 Feeling more like a street party than a stage play, Arizona Theatre Company has opened “American Mariachi” with a vigorous burst of enthusiasm that steamrolled over the audience on opening night to inspire an instant standing ovation.

Though the dialogue does contain a number of lines in Spanish,  the play's message is always clear – women can be anything they want to be, even mariachis.

One could also say “American Mariachi” is a primer for gringos on how to find the heart of this proudly emotional music that, for many, is the sound of Mexico itself.

During the entire evening Tucson felt like the perfect place to be watching this play: A bi-lingual city that loves to nurture its Hispanic flavors and history. Also appropriate is how all four musicians in the cast got their start as performers playing in the iconic Mariachi Los Changuitos Feos de Tucson.

The fit is so good, I'm betting Old Tucson could mount a production of “American Mariachi” in its cowboy saloon and leave it running all year around.

Christopher Acebo as dirctor at ATC keeps the pacing quick and bright, zipping through 95 minutes of action with no intermission. Cleverly enough, playwright Jose Cruz Gonzalez has worked in a quartet of mariachis – played here by Esteban Dagnino, trumpet, Francisco Javier Molina, violin, Ali Pizarro, vihuela, and Antonio A. Pro, the massive guitarron – as a kind of Greek instrumental chorus. They don't speak, but do add their spirited playing at key moments to give the plot a jolt.

The musicians and the actors work together seamlessly. The music director is Cynthia Reifler Flores. Toward the end, the five female cast members do play their instruments, too.

The story and the acting that's required are all pretty basic. “American Mariachi” is set in the mid-1970s, somewhere in the southwest, where feminism is feeling free to fly.

With such fervor in the air, young Lucha Morales (Christen Celaya) discovers that her mom Amelia (Diana Burbano), who suffers with dementia, suddenly flashes to life whenever she hears a certain mariachi recording.

Instantly Lucha decides to start a mariachi band, even though she doesn't play a musical instrument. Lucha's best friend Hortensia “Boli” Perez, already an ardent feminist, is totally in with the idea. She doesn't play anything, either.

Of course Lucha's father Federico (Danny Bolero), who is a mariachi with a beautiful uniform and plays in restaurants whenever he can, is vehemently opposed to the idea. Only men can play mariachi, he insists. It's tradition.

Most of the story involves Lucha and Boli getting three female friends to join them, to play that song so Lucha can reconnect with her mom. The friends are Isabel Campos (Alicia Coca), Soyla Reyna (Marlene Montes) and Gabby Orozco (Osiris Cuen).

The struggles of getting those friends to join in her band, fighting all the male resistance, learning to play their instruments and savoring their success leads to a triumphant ending that will leave you wanting to leap to your feet, as well.

"American Mariachi" plays through May 30, with performances at various times Tuesdays through Sundays in the Temple of Music and Art, 330 S. Scott Ave. Tickets are $25-$90. For details and reservations, 622-2823, arizonatheatre.org

Posted by TucsonStage.com at 12:58 PM