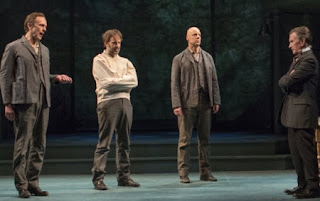 Dr. John Watson (R. Hamilton Wright), at far right, questions a trio of criminals all claiming to be Sherlock Holmes. Each makes a convincing case he is The Man.

Wow! Arizona Theatre Company has outdone itself with the world premiere production of “Holmes & Watson” by Jeffrey Hatcher to close its historic 50th anniversary season.

As much to be admired as the actors and director is the fanciful stagecraft of projection designer Jeffrey Elias Teeter. Combining massive rear-screen projection techniques using computer-precise blending combined with John Ezell's scenic design, onstage cinematic effects are created that look as three-dimensional as the actors themselves.

Essential to being sucked into the mystery which Hatcher has devised is the audience's commitment to belief in the location's desperate isolation. A body-shaking clap of thunder announces the play's dark beginning on a stormy hard rock island of isolation in a perpetually angry and storm tossed Scottish sea on which some tortured mastermind has built an unforgiving stone edifice which, by 1894, had become an asylum dedicated to confining criminals with particularly twisted minds.

Gloom is the dominant atmosphere, yet Teeter makes it seem even deeper, more mysterious and suffocating, as the intrepid Dr. John Watson (R. Hamilton Wright) applies his own brand of scientific rigor to a particularly ingenious situation.

We are informed that for several years Holmes has been presumed dead, tragically swept away in Switzerland's torrential Reichenbach Falls while in dogged pursuit of his arch-nemesis Professor Moriarty.

Yet, Dr. Watson has recently received word from Dr. Evans (Philip Goodwin) that his asylum contains three prisoners absolutely convinced each is Sherlock Holmes and the other two are imposters.

As there were no late 19th-century photographs of the notoriously camera-shy Sherlock Holmes, no one but Dr. Watson himself can be trusted to positively identify the renowned detective.

The tale will be told in 90 minutes without an intermission, so once this train of conflicting facts and conjecture starts to roll, there's nothing left to do but hang on.

Identified only as Patient 1 (James Michael Reilly), Patient 2 (Noah Racey) and Patient 3 (Remi Sandri), each has a distinctly different personalty.

One has Holmes' keen eye for discerning detail, one is in a straitjacket and the third one can no longer hear or speak.

Dr. Watson's questioning takes some devious twists as all prisoners use their own traits to keep the tension mounting.

Of course you can take part in the mental gymnastics, racing ahead to spot all the red herrings and antcipate every kink in the trail. But really, why not leave that to the professionals?

Trust me, in the end you are still going to be completely surprised anyway.

And only a true devotee of Professor Moriarty would be mean enough to reveal the ending and ruin the surprise for everyone else.

"Holmes and Watson" runs through May 5 with performances at various times Tuesdays through Sundays in the downtown Temple of Music and Art, 330 S. Scott Ave.