"LET'S LIVE A LITTLE" MAKES US ALL ONE FAMILY 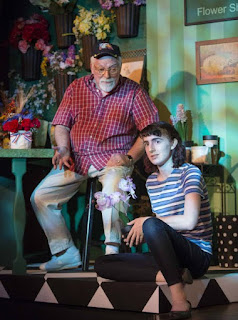 Although the plot and the relationships of some characters get a little blurry, the message of “Let's Live A Little” at Invisible Theatre is clear – this journey through life will depend on what you make of it.

Sure, we all sort of know that, but playwright Kathleen Clark has also written this folksy play to remind us it is never to late to have one more adventure.

Susan Claassen and IT have been helping Clark develop this homespun chronicle for about a year, watching as the production became a format with six parts presented without intermission by 12 actors in 90 minutes.

There isn't a main personality to follow around but a series of highlights from the lives of several friends and neighbors whose daily doings weave the lengthy fabric of Mine Hill, New Jersey, a community founded in 1715.

Claassen proudly says this is the largest cast ever in the 46 year history of IT. With so many people coming and going there are sure to be times when you think “I know someone just like that.”

“Let's Live A Little” chronicles any recent year from July 4 to July 4, going through all the seasons but postmarked by Jack Neubeck's touching performance as Sam Scarborough. He has been the town florist for half-a-century and loves fireworks. His descriptions of those blossoming flowers in the sky put the poetry into Mine Hill's annual celebration of the historic holiday.

Lucille Petty plays Sam's petulant granddaughter Lily, a college freshman who already feels like a failed writer with nothing more to say since she stopped keeping her daily diary in high school. She's ready to forget about college before she even gets started.

But most of the people we meet are older, their children grown and gone. Being a few steps beyond the tail end of middle age and finding oneself single again can feel a lot like accidentally stepping into the deep end of the swimming pool.

Sam and his wife Hadley (Roxanne Harley) have always had each other, but now she can't see very well and he can't hear very well. Both of them hobble around with one foot in a support boot, yet they refuse to hire a nurse to help clean their house, go get groceries, that sort of thing.

One of the play's closing scenes develops empathy and some laughs as their daughter Daisy (Susan Kovitz) insists the couple interview a trio of home care nurses.

In a completely different scene, Molly McKasson is delightful as the forgetful and somewhat eccentric neighbor Vivien. Getting new glasses and a new outfit inspire her to have a whole new personality.

What we in the audience receive is a warm feeling of looking through a photo album of family emotions, their worries and triumphs. We don't really know any of the family members but we do feel a connection with their special moments.

It's this shared striving that reminds us how we are always lots more alike than different. A shuffled deck of family experiences, able to stand alone but better off when we are in the game together.

“Let's Live A Little” runs through April 30 with performances at 7:30 p.m Wednesdays through Saturdays, 3 p.m. Sundays, at Invisible Theatre, 1400 N. First Ave. Tickets are $32, with discounts available. For details and reservations, 882-9721, or visit www.invisibletheatre.com

Posted by TucsonStage.com at 6:21 AM