BRING YOUR OWN BRAIN TO "DOVE AND ALI" 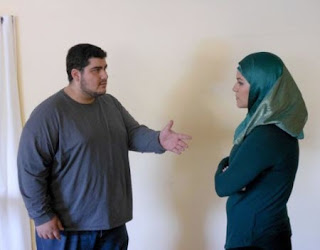 Tyler Gastelum and Isabelle Tinsley challenge each other in “Dov and Ali.”

Was playwright Anna Ziegler really saying “There will never be peace in Israel” when she wrote “Dov and Ali?” Does Something Something Theatre agree by staging this production directed by Joan O'Dwyer?

You can decide for yourself as this doughty young company presents “Dov and Ali” through April 23 at the compact Community Playhouse, 1881 N. Oracle Road.

Ziegler is more interested in developing philosophical points than creating complex theatrical characters, but there is some rewarding food for thought here.

Everything is framed in the fundamental differences between Muslim authoritarian attitudes and the Jewish insistence on talking about everything from all sides before making a decision.

But we also see that both religions demand an unbending loyalty to the structured societies and securities they provide.

Dov (Paul Hammack) is a Detroit high school English teacher who wears his yarmulke to class every day, but also has a girlfriend Sonya (Callie Hutchison) who isn't Jewish.

Ali (Tyler Gastelum) is a student in Dov's class, who has a younger sister Sameh (Isabelle Tinsley) he feels obligated to keep in line with Muslim family traditions.

“Dov and Ali” is presented in 90 minutes without intermission. Which is just about the right amount, as there is no singing or dancing a la “Fiddler on the Roof” to lighten the intensity while Dov and Ali question themselves and their faith.

Though the acting is as fundamental as the basic black stage set, the objective here is not so much to carry you away as to dramatize how far apart both religions are from each other.

The two women, of course, stand in for all women and how they are treated by these disparate cultures.

Not to oversimplify, but Ali is convinced the strength of his religion is its complete togetherness. The lines of authority are clear. There is no confusing discussion or debate. There is freedom through discipline.

Dov is devoted to freedom of thought. To him, this is the source of all inspiration. Ali believes that is a stupid concept.

Providing a little break with a splash of human emotion are a couple of side issues. Sonya loves Dov and is willing to convert to Judaism if he will just agree to marry her. Dov isn't so sure.

Meanwhile, Sameh has fallen in love with unseen Mo, kind of a rebel who isn't that interested in acting like a Muslim. Ali refuses to let his little sister pure of soul be contaminated by a boy with such disgusting ideas.

All the issues are kept swirling, love of one's faith, love of one's romantic heart, a future that isn't particularly inviting to any kind of insistence on rigidity.

Something Something Theatre also enjoys having audience talk-backs after each performance. Plan to stay, for sure, and get your biting questions ready. Don't just say the actors did a nice job.

Tickets are $22 with discounts, available online at www.somethingsomethingtheatre.com/dov-and-ali.html

Posted by TucsonStage.com at 9:09 AM