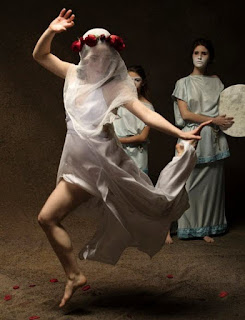 Gabriella De Brequet as Salomé and Grace Otto as The Slave.

It seems likely, just in general, that when Oscar Wilde first published “Salome” in 1891 there was more than a bit of salacious intent for theatergoers of the time in just that one-word title. The Holy Bible for centuries had made this controversial woman a magnet of attraction, if for no other reason than all men could imagine in their own minds the seductive power of her infamous dance of the seven veils.

Right from the get-go, Wilde's “Salome” was banned in England. Not for any lascivious opportunities it might bring to the theater, but because the representation of all Biblical characters on stage was forbidden.

Let it be said, right up front, that the Scoundrel & Scamp Theatre's production of “Oscar Wilde's Salome” directed by Bryan Rafael Falcon, playing at the Historic Y, is quite chaste. There is no nudity of any sort. There is, however, a lot of impressive shouting!

Christopher Younggren as the beleaguered Herod Antipas, Tetrarch of Judaea, stepfather of Salome, shows some massive acting chops as he free-wheels through all five stages of grief – denial, anger, bargaining, depression and finally, exhausted acceptance before ordering Namman the intimidating executioner in black (Roger Owen) to bring forth the head of John the Baptist. On a silver platter.

Also impressive in their creation of characters mythic in proportion are Hunter Hnat as Jokanaan, the manic Prophet who represents the figure of John the Baptist in this story, and a particularly good Sarah MacMillan as Herodias, mother of Salome and the second wife of Herod Antipas.

Salome, as played by Gabriella De Brequet, is an innocent if willful teen completely lacking in any overt sexuality. Seen today, in our overheated awareness of any form of sexual child abuse, this makes Herod Antipas seem like even more of a pervert. The anticipation of getting to see her dance in bare feet is already driving him a little nuts.

What makes Salome so dangerous in this production is her keen sense of power and her intuitive knowledge of how to wield it. But there is much more to “Oscar Wilde's Salome” than The Dance.

Performed in 105 minutes without intermission, the production's early stages are uneven, put in the hands of less experienced actors whose job is to define the customs and attitudes in pre-Christian times when Judaism was just one of several religions competing for everyone's attention. Christianity was sort of a new idea, considered a big joke with its invisible God.

And maybe kind of scary, he realizes. What king in those times wanted to contend with former enemies coming back to life to challenge the new king's power?

Such insights start jiggling your Biblical knowledge a bit and pretty soon you're thinking, hey wait a minute, maybe Salome isn't the evil person she was made out to be when you went to Sunday School. Maybe the whole point of the story isn't to warn men to beware of the duplicitous nature of women.

Maybe the new view is to see Salome as more power oriented, taking command of a situation and making her mother proud. Several times Herodias insists her daughter is doing the right thing.

After every performance the Scoundrel & Scamp cast comes back onstage to discuss all the different ways to interpret Wilde's play and his elaborate symbolism. Food for thought will be served. As they are saying down at the Historic Y these days, come for the veils, but stay for the philosophy.

“Oscar Wilde's Salome” runs through Feb. 18 with performances at 7:30 p.m. Thursday through Saturday, plus 2 p.m. matinees Saturday and Sunday, at the Historic Y, 738 N. Fifth Ave. Tickets are $28, with discounts available. For details and reservations, 225-0677, scoundrelandscamp.org

Posted by TucsonStage.com at 5:12 AM