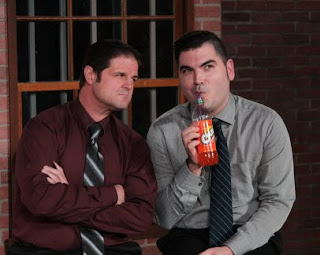 Hamilton (Stephen Frankenfield) and Kyle (Steve Wood) may differ over most gs in their mother's funeral, but they never stop being brothers.

This is a heartwarming drama that never feels sappy or patronizing. Or worse yet, old-fashioned. In the program notes it says MacIvor “wanted to bring up death in a lighthearted way.” That he definitely does.

His humor is chipper and crisp. Sentimental, but in a good way, as buttoned-down older brother Hamilton (Stephen Frankenfield), a very successful architect, and younger brother Kyle (Steve Wood), an ambitious real estate agent who wants to always be selling, work their way through the public steps of resolving their somewhat eccentric mother Bunny's sudden death.

She was standing at the edge of a gay parade when a large costumed man named Pina Colada accidentally fell from his float, crushing frail Bunny. Although this was clearly an accident, Hamilton in his heart blames Kyle, who is gay, after all. Kyle accepts none of this guilt, but their mutual silence on the subject speaks volumes.

For LTW, this two-member cast is their A+ team, directed by LTW's artistic director, Sabian Trout, with full frontal subtlety. The field of emotions all three create is rich with nuance.

As the play opens on a plain white stage scattered with a variety of benches and boxes to sit on, both men are wearing stiff collared shirts with color-coordinated neckties.

But Kyle also wears a vest, as if he needs some additional armor tor his daily confrontations. Hamilton's weapon of choice is to be organized and rational in all matters.

Slowly, as they agitatedly work their way through the proper wording for their mother's newspaper obituary, we get hints of their conflicting personalities and their mother's delight in always doing the unexpected.

At first it sems like she would naturally prefer Kyle's more accepting personality. His best friend openly declares his profession as a sex worker. But gradually we sense a more complex sibling rivalry.

Bunny always admired and encouraged Hamilton's knack for being successful. But she also felt Kyle's vulnerabilities and sensitivity. Hamilton felt like mom loved Kyle best. Kyle felt like Hamilton got all the attention.

But this is only their family superstructure. Or more aptly, substructure, because it lies underneath everything. What we get to enjoy on the surface is a sweet wave of humor draped over the demands proper society makes on each of us as individuals, often squirming to fit into the roles we are given.

It's like, yes, we know Kyle and Hamilton love each other. They are brothers, after all. But so many outside things keept coming up.

Really, though, “The Best Brothers” is not about them. It is about you and how you feel about your own siblings – and about your mom.

The show runs through March 24, with performance at 7:30 p.m. Thursdays through Saturdays, 3 p.m. Sundays, at Live Theatre Workshop, 5317 E. Speedway Blvd. Tickets are $20. For details and reservations, 327-4242, or livetheatreworkshop.org

Posted by TucsonStage.com at 4:03 AM