THE POWER OF LOVE SHINES "OUTSIDE MULLINGAR" 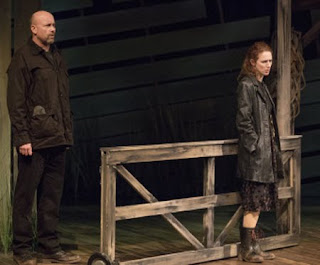 If you think life is hard, try love. Like real love, the old-fashioned kind where both parties believe it is a life-time arrangement – and a quickie on the side will condemn you to burn in Hell for Eternity...seriously.

Like the kind of love they believe in “Outside Mullingar,” where it takes half-a-lifetime to get that first kiss, and there is a lilting Irish fiddle tune for the occasion.

Arizona Theatre Company and new artistic director David Ivers hit all the authentic notes in this thickly textured kitchen table confrontation written by John Patrick Shanley (“Doubt,” the screenplay for “Moonstruck”) sunk deep in Irish tradition, dank rainy dampness, wet wool and a dedication to the past that is both a dead weight and a steadfast anchor.

The iron of creativity is still hot at ATC, which follows one of its best productions ever, “Man of La Mancha” in December, with this new Shanley play (2014) filled with retro love.

Let's call this “ATC's season of vigor,” remembering how lovely “The River Bride” last October became a prescient theater prelude to the Oscar-nominated film “The Shape of Water.” Both works centered on magnetically appealing amphibious male creatures from the Amazon River who can't help being attracted to Earthly women.

Well, at the opposite end of romantic fantasy is “Outside Mullingar,” where reality comes with responsibility and Ivers as director has carefully shaped the narrow rural lives of the Reilly and Muldoon families who have owned adjacent farms for generations.

As we meet them, bearded and grumpy Tony Reilly (John Hutton) is barking at Anthony Reilly (Larry Bull), the 42-year-old never-married son, saying that Anthony has never loved the land nor cared anything about farming.

Anthony admits that is true but nonetheless insists that, for his whole life, he has worked the farm and nurtured its crops faithfully as a son, and would like some credit for that from his own father.

Also there is elderly Aoife Muldoon (Robynn Rodriguez), who has buried her husband that very day. Death is on all their minds, and outside in the rain smoking a bowl of tobacco is Aoife's willful daughter Rosemary Muldoon (Cassandra Bissell), herself nearly 40 and never married, full of a feisty, independent spirit that would explain her extended maidenhood.

The four cast members are perfectly tuned to their provincial roles and unvarnished dialects, with colorfully expressed complaints from the older generation setting the battlefield for the two younger ones, who fumble through their own fog of war to escape from their parents' restrictions.

Performed in some 100 minutes without intermission, everything works to make “Outside Mullingar” a love story between Anthony and Rosemary that also becomes a virtuoso showcase for Bisssell, building her character from a wet loner who smokes too much into a volcano of desire aching for a happy ending.

As the opposing force, Bull creates in Anthony a hulking bald man of wrenching circumstance, often feeling in his tiny farmhouse that he is trapped like an animal in a crate. By turns shy and belligerent, his conversations with Rosemary are never easy. But rooting for her is impossible to resist.

Don't even bother. Just give up and go with it, knowing that on opening night, in that final scene, the audience was giddy with delight.

“Outside Mullingar” runs through Feb. 10 with performances at various times Tuesdays through Sundays. Tickets are $25-$63. For details and reservations, 622-2823, or visit arizonatheatre.org

Posted by TucsonStage.com at 2:30 AM