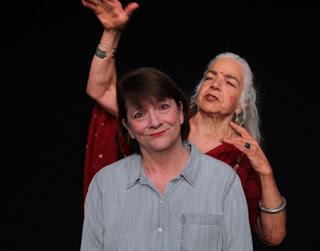 If you're feeling exhausted by endless waves of wacky news on the telly (and who isn't?) hie thee to Live Theatre Workshop for 90 nonstop minutes of wacky laughs in Christopher Durang's “Miss Witherspoon” directed with vigor by Sabian Trout.

After the playwright enjoyed decades of earlier success with such eccentric theater pieces as “The Marriage of Bette and Boo,” “Sister Mary Ignatius explains It All For You," "Beyond Therapy" and “Baby With the Bathwater,” Durang wraps us in a distillation of his best material in this fancifully metaphorical work (staged off-Broadway in December 2005) which LTW has delightfully placed on a bare stage and backdrop painted with fluffy blue clouds. (While you are waiting for the play to begin, there will be extra fun studying the cloud shapes, credited to Glen Bucy).

“Miss Witherspoon” was nominated for the Pulitzer Prize for Drama in 2006, although no prize would be awarded that year. Time Magazine and Newsday called "Miss Witherspoon" one of the 10 best plays of 2005.

This lineage is important to keep in mind because after awhile the dialogue starts to feel like the Best of Blenderized Durang. Not that there is anything wrong with that.

As we all know, Durang was permanently warped by his Catholic upbringing. But here he does give the Jewish religion a role of equal importance.

The Buddhists also have a comforting part to play as the Mental Balancers, telling Miss Witherspoon she must continue cycling through many rounds of reincarnation to purify her aura, which they describe as being reminiscent of brown tweed. (Somehow it always seems like damp brown tweed, but I've probably seen too many British detective films set in foggy London).

Nevertheless imagine this, a woman (Leslie Abrams) who seems to have already lived several interesting lives, including being married to Rex Harrison, is standing alone on the cloud-covered stage at LTW when she is struck dead by a falling piece of debris from the abandoned and disintegrating Skylab satellite as it re-enters Earth's atmosphere. (We never see this, we just hear about it)

Having to die because the sky is falling does not sit well with her even though she is, by her own admission, terminally depressed and unable to control a constant stream of angry complaints about most everything.

Soon enough she is joined in this kind of waystation in the clouds known as Bardo by the determinedly polite Maryamma (Carlisle Ellis with a vaguely Indian accent) who patiently explains the rules of reincarnation and its necessity. Maryamma also tells this woman that all the other spirits – they are sort of like the administrators of reincarnation – refer to her as Miss Witherspoon because she is so cranky and crotchety.

Maryamma also introduces each new scene, as Miss Witherspoon is forced to become a baby in its crib, later an upset teenager and then several other roles loosely connected to demonstrate many of the cruelties in modern life that come to people who misbehave.

Always over-exaggerated and pretty funny, we get caught up in the gems of truth contained in the silliness and absurdity of Durang's dialogue.

He is only too happy to take aim at all of society's Sacred Cows he can think of, while cast members Bree Boyd, Carley Elizabeth Preston (whose costumes include a marvelous all-white cowgirl outfit) and Drew Kallen-Keck play a variety of short roles supporting whatever reincarnation challenge Miss Witherspoon gets thrust into by Maryamma's spiritual associates.

The show continues through June 9 with performances at 7:30 p.m. Thursdays through Saturdays, 3 p.m. Sundays, at Live Theatre Workshop, 5317 E. Speedway Blvd. Tickets are $20 general admission, with discounts available. For details and reservations, 327-4242, or visit livetheatreworkshop.org

Posted by TucsonStage.com at 2:25 PM