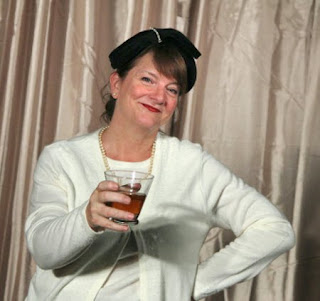 Leslie Abrams at Live Theatre Workshop has sharpened her take on the acerbic wit of Dorothy Parker, best known for being an outspoken female among males enjoying the heady atmosphere in the 1920s and 1930s at the famed Algonquin Round Table -- New York’s literary equivalent of the cool kids’ table.

Other dazzling minds who gathered around this Manhattan dining room at the Algonquin Hotel included Alexander Woollcott, Robert Benchley, Harold Ross, Robert E. Sherwood and Franklin Pierce Adams, the newspaper columnist who made their wordplay and wars of wit famous in “The Conning Tower.”

Abrams as Parker mentions several times how sophomoric she considered the snarky comments that made her and other Round Table regulars so well known, because pop culture personalities of those times were actually admired for being smart.

It’s easy to forget these days – buried under the 24/7 media barrage of new faces determined to get our attention with rude, crude, loud and obnoxious behavior – that there was a period when biting humor was considered a weapon of mass destruction.

A rapier wit, they called this weapon, and one of the most brilliant in wielding it precisely was Dorothy Parker. Her career spanned both World Wars and her resume came to include satirist, short story writer, literary critic and screenwriter.

Yet it was the rabid rejoinders that people remember best to this day.

Wikipedia reminds us Parker also received two Academy Award nominations for screen writing and was later considered by the government to be such a threatening social activist she was put on Hollywood’s communist blacklist. Parker also left her entire estate to the Rev. Martin Luther King, Jr., when she passed away in 1967.

It is this life-long dedication to social justice that first motivated Abrams to write “Dorothy Parker’s Last Call” some five years ago and perform it as a one-woman piece of theater.

The work as directed by Sabian Trout has had some fine tuning in rehearsals for this production, which runs a crisp and quick 85 minutes without intermission.

Abrams spices her portrayal with plenty of Parker’s salty sizzlers, but we do get some depth and insight into the writer’s troubled childhood from which came her insistence on justice for all.

Notable Parker quotes include: “If you want to know what God thinks of money, just look at the people he gave it to.”

“This is not a novel to be tossed aside lightly. It should be thrown with great force.”

“Brevity is the soul of lingerie.”

Tickets are $20 general admission; $18 for seniors 62+, students and military; $14 for the Closing Thursday Performance. For details and reservations, 520-327-4242, or visit www.livetheatreworkshop.org

Posted by TucsonStage.com at 5:39 AM