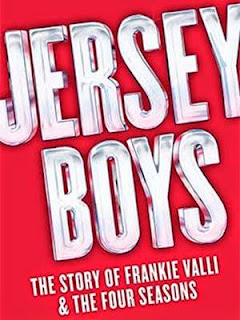 “Jersey Boys” delivers. Nearly 10 years after this juke box musical opened on Broadway, then continued to delight boomer audiences coast to coast, it is still packing heat.
Broadway in Tucson brings us the Garden State lads singing “Sherry,” “Big Girls Don’t Cry” and “Walk Like A Man” right out of the box. The really big numbers are saved for the second act.

We all know the Four Seasons’ story by now. Frankie Valli, Tommy DeVito and Nick Massi with sooty ring around their blue collar backgrounds couldn’t decide between being hoodlums and becoming entertainers.

More or less by chance they got hooked up with pop prodigy singer/songwriter Bob Gaudio (15 when he penned the teen hit “(Who Wears) Short Shorts,” who found  inspiration writing songs for Valli’s acrobatic falsetto voice.

Playing through Sunday at Centennial Hall, “Jersey Boys” is a bullet-proof provider of sweet nostalgia mixed in with brief spurts of sexual and profane language, described euphemistically as “regular talk in New Jersey”.

What makes the show work is the heart that's drawn from the continuous internal struggles among all four of the Seasons. One sequence in the second act begins with four microphones onstage. The boys sing, a conflict follows and three microphones appear on stage.

The boys sing, another altercation, and two microphones appear on stage. Then they are down to one microphone, but no matter how many appear, the music keeps on coming with Frankie Valli’s high falsetto notes bouncing off the stage's overhead rigging.

On opening night the dialogue sounded a little muddy, but that should get cleared up soon. All the singing voices were solid, even when the acting didn’t spark too many flames. It was easy enough to get the idea that DeVito is the control freak and wannabe tough guy who always has to run the show.

In the beginning, DeVito did exactly that. But as Gaudio’s actual talent and business sense became more important when the hits started coming, DeVito’s value slipped away – which only made him meaner. When the real mobsters got involved, DeVito wasn’t that tough.

Credit the book by Marshall Brickman and Rick Elice for a deft balancing act between imagined street punk loyalties of the Four Seasons and the sweeping, soaring sentiment of the songs as the group’s hits advanced to such truly timeless ballads as “My Eyes Adored You,” “Working My Way Back to You” and my personal favorite, “Can’t Take My Eyes Off You.”

The stage design is based on a two-story three-dimensional iron grid plus a circular stairway that shouts industrial strength grit. Rear projection silhouettes of factories and tenement rooftops hung with fire escapes complete the picture.

Chairs, tables, a recording studio and other items appear to imply scene changes from tiny clubs to nightclub show rooms to big time concerts as the group rises, then falls into disarray then rises again, Jersey-style -- because nobody from Jersey is going to die without a fight.

Posted by TucsonStage.com at 3:18 PM